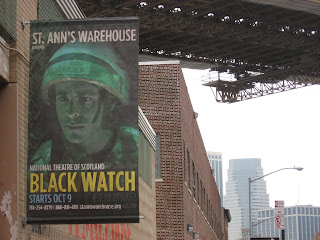 Gratuitous Violins rating: **** out of ****
I've been trying to describe what makes Black Watch so riveting. I think it's because the play, at St. Ann's Warehouse in Brooklyn through Dec. 21, is simply one of the most stunning productions I've ever seen. The language is raw and blunt, the images are inventive and unforgettable.

I'm not big on war stories, but director John Tiffany and his creative team have come up with such an intense combination of music and sound and lighting and precise, almost ballet-like movement to re-create the experiences of a storied Scottish regiment in Iraq. (Click here to watch an interview Charlie Rose did with Tiffany and actor Peter Forbes, who plays the officer in Black Watch.)

Aided by writer Gregory Burke's interviews with soldiers who served in Iraq in 2004, actors from the National Theatre of Scotland convey all of their conflicting emotions - the sense of tedium, fear, longing, anger and bewilderment that these men feel, along with their bravado, toughness, playfulness, profanity and intense pride.

In 2004, the Black Watch regiment moved from the relative peacefulness of Basra to an area of constant insurgent attacks. The transfer was wildly unpopular in Britain, where it was seen as an attempt to placate the Americans. On top of that, at the end of 2004, the British government announced that the Black Watch would cease to exist as an independent entity, but would be combined with other units into a new Royal Regiment of Scotland.

So the play chronicles a period of great tension and anxiety for the men of the Black Watch. We see the short bursts of activity and long stretches of tedium. We listen to them gradually begin to express doubts about whether they should even be in Iraq. Mark Grimmer's and Leo Warner's video designs make them spectators in their own war, watching Iraqis and Americans battle from afar. Laura Hopkins' design resembles a military parade ground, with spectators sitting on both sides of the rectangular-shaped set.

Under Gareth Fry's sound design, we're bombarded with booming mortar and rocket fire. Colin Grenfell's subdued lighting echoes the tension and danger in patrols, as well as the tenderness of soldiers reading letters from home. Under movement director Steven Hoggett, the men, standing apart from each other as if in their own separate worlds, act out those letters silently, in a way that's graceful and absolutely heartbreaking.

But what I found most amazing is the way the play relates the story of the tradition-rich and oldest Highland regiment. By lifting one of their mates in the air, turning him every which way, dressing and undressing him in different uniforms, we learn about the nearly 300-year history of the Black Watch - its formation, the wars it fought in, its participation in President Kennedy's funeral. Exposition never sounded so fascinating.

At the beginning of Black Watch a writer, played by Michael Nardone, (who doubles as a sergeant) asks the former soldiers what it was like in Iraq. They're blunt: They know we've already made up our minds - we assume that they joined because they couldn't do anything else, because they couldn't find jobs. In reality, many of them have followed their fathers and grandfathers into the regiment, which draws from a very small part of Scotland. Being in the Black Watch is part of their identity. They wear a scrap of the tartan on their uniforms.

I think it's a tribute to the superb cast - the soldiers are played by Duncan Anderson, David Colvin, Paul James Corrigan, Emun Elliott, Jonathan Holt, Steven Miller, Paul Rattray and Nabil Stuart - that they've all kind of blended into one unit in my mind. Because in the end, that's how they see themselves. They're not doing this for their country or their government, they're doing it for their mates, for reasons they say many of us will never understand.

At the beginning, of Black Watch, these men don't seem very likable - they seem rude, boorish and profane. To be fair, I'm not sure they'd like me either. But two hours later, I felt more sympathetic. I respected them for what they'd been through, for the sacrifices they'd made.

It seems to me that the question at the core of Black Watch is whether those of us who have never gone to war can understand what we send our soldiers to do, or why they go. In the end, it's an unknowable experience for most of us. But we owe it to them to listen.
Posted by Esther at 12:48 AM