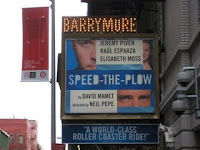 Wow, a second actor I saw on my recent trip to New York has been forced to leave a show early. First, Christian Hoff pulls out of Pal Joey with a foot injury and is replaced by his understudy, Matthew Risch. Now, Jeremy Piven has left his role as Hollywood producer Bobby Gould in Speed-the-Plow because a high level of mercury in his system has made him sick.

According to a statement from the show's producers released today, "We have been advised by Jeremy Piven's medical representatives that he is seriously ill and is unable to fulfill his contractual obligation to Speed-the-Plow. Consequently, he has left the production ten weeks early."

Well this is live theatre, after all, and I do understand that people get sick. I certainly wish Piven a quick recovery. What I don't understand is this bizarre quote playwright David Mamet gave to Variety: "I talked to Jeremy on the phone, and he told me that he discovered that he had a very high level of mercury. So my understanding is that he is leaving show business to pursue a career as a thermometer." Huh?

While I didn't love the play, I thought Esparza gave an amazing performance. If I could, I would definitely be interested in seeing it again with Butz or Macy. I feel sorry for Moss, of AMC's Mad Men, who's making her Broadway debut. The whole second scene is her character and Gould. Now, she'll have to get used to playing off two different actors.

So far, there's been some anger on the part of fans, judging from these comments on a New York Times message board. Several people said they had bought tickets to Speed-the-Plow as Christmas presents for spouses or made plans to see the play themselves solely because they were fans of Piven's from his role on HBO's Entourage.

I can certainly understand how they feel. Moss and Piven were the two main reasons I had for wanting to see Speed-the-Plow and I would have been very disappointed if they'd been out. (Even though, in the end, I enjoyed Esparza's performance much more. It was definitely the highlight for me.)

I've been extremely lucky (knock on wood) with nearly all the actors I've come to Broadway to see. The handful of times that I've had understudies, I thought they were great - including Ariana Grande in 13 and Saycon Sengbloh in The Color Purple.

Interestingly, the producers of Speed-the-Plow are going for established actors to replace Piven, rather than give the role to his understudy, Jordan Lage. (Who's playing the role for a few performances.) I guess that's simply a reflection of the fact that you almost always need a "name" in a play on Broadway.

There's a story in The New York Press by Dana Rossi about the actors who are understudies to celebrities on Broadway. "Let’s face it; we’re such a fame-obsessed culture that celebrity alone often draws people to theater in droves."

Rossi takes issue with fans who come just to see a star and questions why they're at the theatre in the first place. "It comes down to this: Why are you seeing this show? If it’s just to see Shirley Famouspants in a role anyone could play, maybe you belong at the venue where the performers are inside the big screen."

I don't think there's anything wrong with wanting to see a play or musical because it features an actor you know from television or the movies. That's often the reason I'm interested in seeing a play. Whenever I go to New York, my coworkers want to know "who" I'm seeing that they might have heard about.

But honestly, the actors who end up impressing me the most are people like Eve Best, Raul Esparza, Hallie Foote, Gregory Jbara, Laura Benanti, the entire cast of August: Osage County. They're actors most people have probably never heard of unless they're theatre fans.

In some cases, I'd never heard of them before seeing them on stage. But they totally won me over and they've become the reason to see the show. And that's become part of the thrill - which actor will I see for the first time who'll really excite me?
Posted by Esther at 3:43 PM

Mercury = thermometer; Mamet is being a smartass, that's all. Great line.

I suppose Mamet's being funny although given that he may be seriously ill, how funny is it?

I sometimes go to see something based on who might be in it although it's not my only criteria. The one question I get from people when I say I'm going to something is "Who's in it?".

I guess I knew what Mamet meant, I just wasn't sure why he would say something like that, other than to be a jerk!

I agree, Dale. That's the one question I get from friends and coworkers, too. But the "Hollywood" actors often disappoint me while the stage actors often give the performances I love the most, like Raul Esparza in Speed-the-Plow.