In Trinity Repertory Company's production of The Receptionist, we get an idea of just how mundane and routine that job can be: answering the phone, zealously guarding office supplies, gossiping with coworkers. 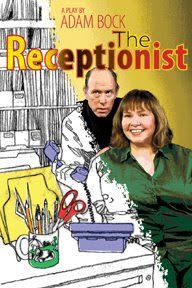 concern. (Pay close attention to the prologue by Timothy Crowe, who plays the boss, Edward Raymond, and you'll get some idea.) Adam Bock's dark comedy is an attempt show what nefarious goings on can lie beneath the most ordinary settings.

This is my second time around with The Receptionist, so it's difficult for me to review the play as if I'd never seen it before. And it was a mixed bag - some things I liked better this time around, some things didn't work as well for me.

Seeing the show for a second time definitely helped make the plot more understandable. But it still seems to me like there's too much small talk in The Receptionist, too much waiting around for something to happen. When the tone switches from comedy to something more ominous, it comes kind of abruptly. In the end, the play remains kind of unsatisfying.

Also, honestly, I preferred the cast and some of the costume and set design choices in the production I saw last fall, at the Manhattan Theatre Club.

Okay, I know I'm starting to sound like a theatre snob - well, you know, when I saw it in New York. I know I'm supposed to judge each production on its own merits and really, I did go in with an open mind. The problem is, and I know this is unfair, I've already got a picture in my mind of what these characters should look like and sound like.

In the Trinity Rep production, Janice Duclos plays the title role of receptionist Beverly Wilkins and she's got her hands full. There's Lorraine, the flighty and flirtatious coworker, played by Angela Brazil; Martin Dart, a rather mysterious stranger from the Central Office, played by Timothy John Smith; and her mostly absent boss, Mr. Raymond, who seems to be harboring some qualms about his job.

Bock, who used to work in the theatre's marketing department, wrote the part with Duclos in mind, and it's a great comic role. Duclos is very funny - she's got the office banter down pat, she's overly protective of pens and pencils as if the money for them came out of her own pocket and she's constantly dispensing advice, all the while coping with her own problems at home via a steady stream of personal phone calls.

But while everyone else around me was laughing and nodding their heads in recognition with Duclos' performance, I was thinking about Jayne Houdyshell, who played the role off-Broadway. She was truly inspired, more witty and satirical and totally spot-on. For me, she was the best part of the play. Duclos is very good but she simply couldn't make me forget what Houdyshell did with the role.

And something about Brazil just grated on me although, again, the audience seemed to love her. Brazil's Lorraine is excessively emotional and loud and over the top - a little too theatrical for me. I've seen Brazil give some fine performances but this one just rang false. Plus, William Lane's costume design - short, tight-fitting black skirt, lots of jewelry and a shimmery purple blouse - seemed wrong for this kind of office. (Although it did fit with Brazil's character.)

And in my humble opinion, set designer Eugene Lee has made Beverly's desk too high, so the audience can't see over it. Part of the fun off-Broadway was watching Beverly wipe down her workspace with disinfectant, seeing the pens and pencils and stapler and pads of Post-It notes. When you saw that desk, it really set the scene.

Except for me, director Curt Columbus (who's also Trinity Rep's artistic director) and the playwright, I doubt anyone who goes to see The Receptionist will have seen the New York production. So I realize that a lot of my criticism is moot.

There is a lot of humor and the subject is thought provoking. Someone seeing The Receptionist for the first time may enjoy it more than I did. I just wish Bock had given us a little more to chew on in terms of what this office really was all about.
Posted by Esther at 12:04 AM