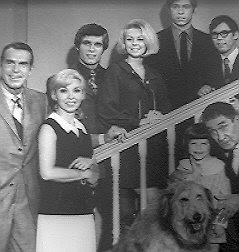 I was so sad to hear that actress Beverly Garland died Friday in California. Garland, who was 82, is best known for her role in the last three seasons of the long-running tv series My Three Sons, when her character marries widower Steve Douglas, played by Fred MacMurray. But I remember her for another reason - I once stayed at her hotel.

Twenty years ago, I made my first, and so far only, trip to Southern California. I spent a few days in San Francisco, (one of my favorite cities!) then met a friend in Palo Alto and we drove down the coast to Santa Barbara, where she was in grad school. It was my first time seeing the Pacific Ocean and it was pretty exciting. It really does look very pacific!

When we got to Santa Barbara my friend had to go back to class, so I rented a car and did some sightseeing on my own. I spent a day driving around the city, admiring all the Spanish-style architecture. I drove up north to the magnificent Hearst Castle.

One day I went south, to Los Angeles, so I could take the Universal Studios tour. I was a little nervous about driving to L.A. and contending with the city's notorious freeways. But I was so close to Hollywood and the magic of movies. How could I resist? I made it there without a problem although by the time I left, it was dark and I remember things were a little more hairy.

Universal was lots of fun. The tour takes you on a tram ride through the back lot. I was just looking through my photos and I have one of the Leave It to Beaver house and another of Cabot Cove, from Murder, She Wrote, and a few others that I can't remember what they're supposed to be. I also have pictures of the cars from Back to the Future and Knight Rider and a life-size cardboard cutout of Tom Selleck. I'm pretty sure we saw the shark from Jaws, too.

I thought I'd stay overnight and do some more sightseeing in the morning. I asked a guy at the information booth about a hotel and he suggested the Beverly Garland Hotel. He even said, "You know, the mom from My Three Sons. It was a great suggestion - the hotel, built by Garland's developer husband, was very nice. (It's now the Beverly Garland Holiday Inn.)

The next day, I drove to NBC studios in Burbank, where I saw The Tonight Show set. I stopped at Grauman's Chinese Theatre to see the footprints (and handprints and leg prints) of the stars in cement. I saw the Hollywood sign. I love being a tourist! I had a wonderful trip and Beverly Garland helped make it possible. So I'll always remember her very fondly.
Posted by Esther at 9:20 PM