Wow, - Federal Hall, Trinity Church, Chinatown, the Lower East Side - watching the first few minutes of the 1949 musical On the Town is like revisiting my tour of Lower Manhattan. It was so cool to see all of those familiar sites I'd just visited. What a wonderful surprise! 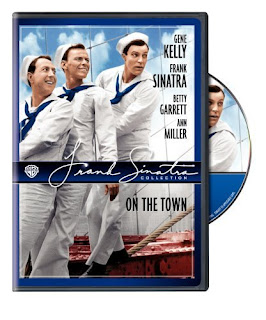 The movie, based on the 1944 Broadway show, features Frank Sinatra, Gene Kelly and Jules Munshin as three sailors on a 24-hour shore leave in wartime Manhattan. It's so great to see the city through their wide-eyed enthusiasm. I can relate! They're hoping to do a little sightseeing and meet "a real New York glamour girl." Awww, good luck, guys!

If On the Town were remade today, who knows what filmmakers would have in store for these innocent swabbies on the streets of Manhattan. But never fear, in no time at all they're paired off with three lovely ladies - an anthropologist (Ann Miller), a cab driver (Betty Garrett), and Miss Turnstiles, the queen of the subway (Vera-Ellen). Soon, the six of them are out for a night on the town. What fun!

Sinatra, Kelly and Munshin are so sweet and funny and lovable as the sailors. I especially enjoyed the big production numbers that feature the six of them, like "You Can Count on Me" and "On the Town." I mean, anytime you get to watch Gene Kelly dance it's pretty terrific.

On the Town is noteworthy as the first musical feature film to be shot on location, at the insistence of co-directors Kelly and Stanley Donen. This was at the height of Sinatra-mania and special precautions, such as cameras hidden in station wagons, were used to avoid problems with crowds during the filming.

But I think it was worth the effort. Seeing all of those landmarks - the Brooklyn Bridge, Rockefeller Center, the Statue of Liberty, as the sailors sing "New York, New York" was great. It really becomes a love letter to the city. On the Town definitely would have lost something if it had been shot entirely on a sound stage and back lot in Hollywood.

Watching the movie makes me wish I'd seen the semi-staged production put on last month as part of the City Center Encores! series. Now I have a better idea why my fellow bloggers were praising it so highly.

Although I know there are differences between the film and stage versions. A lot of Leonard Bernstein's music was jettisoned for the movie. But I assume the story, by Betty Comden and Adolph Green and based on a Jerome Robbins ballet, is pretty much the same.

While the original Broadway production of On the Town played for 14 months, the two revivals didn't fare nearly as well, closing after only a couple of months. So it's not likely I'll get to see On the Town on stage anytime soon.

Sadly, while a new dvd of On the Town was released in May as part of a Sinatra collection, it's still a bare-bones version, with only the original theatrical trailer included. Couldn't Warner Bros. have come up with a few extras? A two-disc 60th anniversary edition would be terrific.
Posted by Esther at 12:27 AM