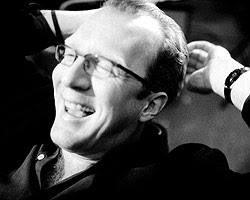 There's a good interview with playwright Tracy Letts at the online magazine MusicOMH, conducted by freelance journalist Natasha Tripney, who also blogs at Interval Drinks. You can read her review here.

Letts talks about bringing August: Osage County to the National Theatre in London for an eight-week run. He says that the Tony and Pulitzer-winning drama, which arrived with most of its Broadway cast intact, is "playing differently" in Britain, and one reason is the U.S. election.

“The world views America with a little more hope and optimism than it has in recent years and I think that changes the reading of the play. It might make it a bit of a period piece but it also makes the play serve as a kind of warning which I still think is very valuable."

Letts also talks about what it was like to have his father, Dennis Letts, appear in the play on Broadway, despite having been recently diagnosed with cancer. (He passed away in February.)

"It was strange, having him in my work place, but delightful, I’m glad we had that time together. He was fascinated by the process, to be around stage actors of this magnitude, of this skill level. Even though he’s only in the first fifteen minutes of the play he came to every rehearsal and watched everything. It was a great experience for him to have at the end of his life, I’m glad he got that chance to do it."

And Letts says that his new play, Superior Donuts, which had a run over the summer at the Steppenwolf Theatre Company, will be coming to New York next year. As a big fan of August: Osage County, I was already hoping to see his next play. And an enthusiastic review from Steve on Broadway sealed the deal. This is on my must-see list for 2009.

There's much more to the interview, so check it out!
Posted by Esther at 11:03 AM

GV, I had another wonderful opportunity to chat for a few moments with Tracy Letts after the show opened a week ago Wednesday. It was wonderful to congratulate him, Anna D. Shapiro, and so many in the cast on making this show resonate with their new British audience.

Hey Steve, I'm so glad you had a chance to see "August: Osage County" in in London - and on opening night! I've read some of reviews and they seem to be pretty terrific. It's great that the play is resonating with a new audience. I think the themes and the characters really are universal.

Thanks so much for the link to my interview. He was a fascinating man to chat to and it was great to see the play on the same day. I just suspect the sheer volume of praise - and having so enjoyed reading the play beforehand - raised my expectations ridiculously high.

It was my pleasure. I'm so glad you had a chance to talk to him. Yeah, I definitely understand what you mean about expectations being raised way too high. While I loved "August: Osage County," there have been other shows that have gotten huge amounts of hype where I felt the way you did.