I'm glad there are plans to preserve for posterity Before I Forget, the one-man show by Kirk Douglas that was staged last month for four performances at the Kirk Douglas Theatre in Culver City, Calif.

In an interview with CNN, Douglas says he wants to turn the 90-minute show into a television special and a dvd. Proceeds would go to the Motion Picture and Television Home, where he endowed a wing in memory of his father. 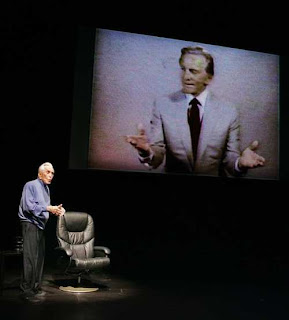 That'll be great for those of us who couldn't get to California. Still, I can't imagine it could compare with the experience of sitting in the audience and listening to the 92-year-old actor reflect on his life and career. I'm thinking this is one where you just had to be there.

"So many people cried," Douglas said, "and I thought, you know, it's easy to make people cry, but it's more important to make people laugh. ... Especially in this world today, if you don't laugh, you cry."

Of course, Douglas is best known for movies such as Spartacus, Lust for Life and Paths of Glory but my favorite is a 1966 film set in Israel called Cast A Giant Shadow. I found it when I was channel-surfing late one night and the movie inspired me to make my first trip to Israel, in 1995. I ended up living there for a year, so Kirk Douglas has had quite an impact on my life.

Here's an interview with Douglas on NPR. And a report from the Los Angeles Times on opening night. In his review, Charles McNulty noted that Douglas' stroke-impaired speech was a little difficult to understand at times but he says:

"Genuinely touching and amusing by turns, the show — special event, really — has a relaxed, moseying feel. It’s as though we’ve been invited into Douglas’ Beverly Hills den to watch home movies and listen to tales from his incredible showbiz odyssey."
Posted by Esther at 10:00 AM