Is it just me or does anyone else think this "promotion" for David Mamet's play Race at Broadway's Barrymore Theatre is in poor taste?

According to an article at BroadwayWorld.com, 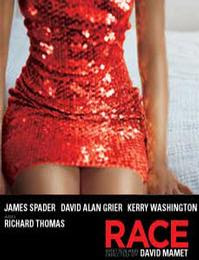 "To celebrate the arrival of spring, RACE will take over Times Square on Wednesday, March 24, 2010 from 11 am - 1 pm and will have nearly two dozen women wear red sequined dresses for the public. This event will also celebrate the fact that RACE is currently the longest-running play of this Broadway season. The women will be coming from all over the city to wear the show's famous red sequined dress, a major plot point in the play."

Okay, spoiler alert if you haven't seen it: Race is about a white man accused of raping a black woman who was wearing the red sequined dress in question and the lawyers who have to decide whether or not to represent him.
So a play about a woman allegedly used as a sex object is marketed by using women as sex objects. How meta! (Guess someone considered it more eye-catching than a group of lawyers in suits carrying briefcases.)
I'll admit I was not a fan of this play so maybe I'm looking at it from a jaundiced perspective. But given the subject matter, having a group of women wearing tight-fitting dresses parade around Times Square is a little unseemly.
What were the producers thinking? Is the point to titillate passersby so they pony up for a ticket? If so, they're going to be awfully disappointed because the woman in the red sequined dress never appears in the play.
Surely there must be a better way to celebrate the arrival of spring on Broadway.
Update: Here are pictures from the event, posted at Broadway World, including one with producers Jeffrey Richards and Jerry Frankel. What a tawdry, disturbing publicity stunt. Don't they realize this is a play about an alleged rape?
Posted by Esther at 11:25 AM

I must admit I laughed when I read about the "red sequined dress" hit on Time Square. I am going to be in the city tomorrow and I am looking forward to seeing this promotional stunt. Unlike you though I really like this play and am going to see it again tomorrow...predominantly for the performances of Spader and Grier, but also for much of the Mametian dialogue. To me this is just the logo for the show and they are putting it out there...the sequined dress IS an important plot point.

Thanks for taking the time to comment. I agree, the dress is an important part of the play but I guess I was more shocked than amused when I read about the publicity stunt. Still, we don't have to agree on everything! Hope you enjoy the show tonight.

Thank you, the show was really good and Spader was terrific.

Ahh, if we were not able to disagree on some things it would be a very boring world...so long as we are able to do so in a civil manner.

I do enjoy reading your blog...take care and best wishes.

I was up there the day of the stunt and was told: 1. Many of the women were shivering. 2. All of the women were very popular -- which is to say, they were ogled. If any of these guys are enticed by the skimpy dresses to see "Race," which only TALKS about a woman in a red dress (we never see her or the dress),I wonder if they can sue for fraud.

Thanks for the comment. Good question about suing for fraud! I'm sure everyone who saw those women in Times Square thought that they represented a character who actually appears in the play. I saw the pictures and you're right, they were there to be ogled, which is incredibly distasteful considering RACE is about an alleged rape victim. What were the producers thinking?! I can't believe there hasn't been more outrage at this.

I am currently taking a class with a man that is playing charles in the play so in studying the play only and not seeing it yet I would like to say that I find it humorous but I also find the language used to be very shocking for this time. And I want to say that the only reason I feel the play was even written with such language was because a 60 some year old man wrote the play and to him it is ok to talk to people like that but news flash it's not. Last thing is that I hate the way the play just ends I think it lacks imagination and a final plot.