I'd like to wish a very happy birthday to composer, mystery buff and puzzle designer Stephen J. Sondheim, who turns 80 years old today. (You can sign a birthday book here.) 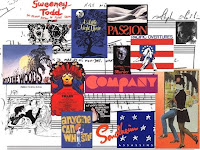 Of course I was aware of Mr. Sondheim's importance to musical theatre long before I started going to the theatre. But my first real introduction came from listening to him and seeing clips from his shows in the PBS documentary Broadway: The American Musical in 2006.
Since then, I've been working my way through the Sondheim catalog: Gypsy, West Side Story and A Little Night Music on Broadway; Road Show off Broadway at the Public Theater; and in Boston, the Sweeney Todd tour and the Lyric Stage production of Follies.
I've watched Company, Sunday in the Park with George and Into the Woods on dvd and I've listened to scores of musicals I haven't seen - Assassins and Merrily We Roll Along. 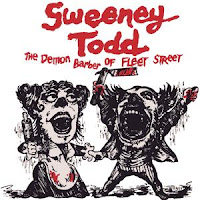 If I had to pick a favorite Sondheim musical it would be Sweeney Todd. Despite my oft-stated squeamishness, I love the setting in seedy, industrial 19th-century London, the themes of class division, injustice and the desire for revenge, and the score's mix of humor and poignancy. The movie with Johnny Depp and Helena Bonham Carter may have its fans but my favorite is the stage version with George Hearn as the vengeful barber and Angela Lansbury as the demented piemaker Mrs. Lovett, which is available on dvd.
I'm by no means an expert on the man or his music but what I appreciate about Sondheim is that he tackles meaty subjects.
I think of Follies as an examination of what happens as we age, how we look back at our youthful dreams with nostalgia and a twinge of regret; Road Show about our ability as Americans to remake ourselves and our desire to get rich quick; Assassins about our obsession with fame and guns; Sunday in the Park with George about the creative process.
Here are two quotes from Craig Zadan's wonderfully detailed book Sondheim & Co. that go a long way toward summing up how I feel: 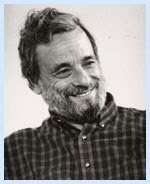 From the late choreographer Michael Bennett - "There are still composers in the theater who are thinking about writing hit songs, but Steve writes for character all the time. Steve, of all the composers I've worked with, understands more about the musical theater than anyone."

And from former New York magazine critic Alan Rich - "It's not such a bad thing, now, is it - being treated in the theater as if you just might be a grownup with a grownup's intelligence? Thank you, Steve Sondheim, above all for that."

Update: What a perfect birthday present - a Broadway theatre! The restored Henry Miller's Theatre on West 43rd Street will be renamed the Stephen Sondheim. Here's a preliminary artist's rendition of the marquee. Hey Roundabout, how about a revival of Merrily We Roll Along as the first show?
Posted by Esther at 1:00 AM