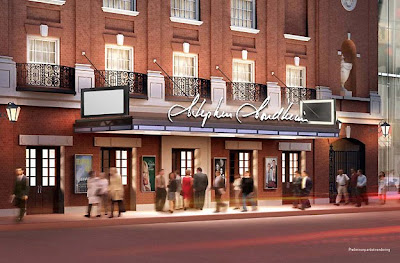 It's so easy to get cynical about Broadway as an over-produced and overpriced theme park or a vehicle for star turns. Then something happens that makes the cynicism melt away.
I'm thrilled that Broadway's restored Henry Miller's Theatre will be renamed the Stephen Sondheim Theatre, as a gift to the composer on his 80th birthday. (The picture is a preliminary artist's rendition of the marquee. How elegant!)
But even more thrilling was seeing these photos when it was announced from the stage of Studio 54, after a performance of the musical revue Sondheim on Sondheim.
It's clear that Mr. Sondheim, surrounded by the cast and his frequent collaborators John Weidman and James Lapine, was surprised and delighted and overcome with emotion.
Kudos to the small group of "Stephen Sondheim devotees" who made a generous donation to the Musical Production Fund of the Roundabout Theatre Company, which operates the Henry Miller's.
Now the ball is in the court of Roundabout's artistic director Todd Haimes to make the opening production at the Sondheim Theatre something memorable. Personally, I'd love to see a revival of Merrily We Roll Along - with a full orchestra, please.
Posted by Esther at 3:06 PM

I totally missed these photos! Wow -- I didn't realize it was a surprise! I figured he knew on some level. But judging from his reaction in these shots...he didn't!

Hey Bob, yeah, I would think Sondheim would have been given a heads-up, too. But obviously not. He looks genuinely surprised! Those pictures are so amazing - capturing real emotion. What a perfect tribute. I'm so glad some wealthy people ponied up and did this for him!