When I heard that Mel Brooks had written a couple of songs for a musical version of Blazing Saddles my initial reaction was "Mel, this is meshugas. You're 83, do you really need the tsuris?" 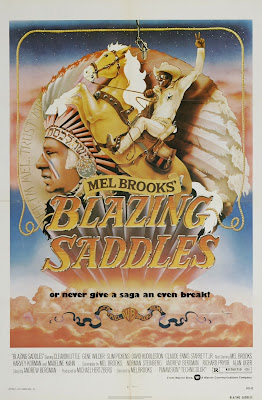 Then I thought no, that's wrong. He's 83 and if he wants to write a Blazing Saddles musical, who am I to tell him to stop? He's already got the theme song from the movie.
This time though, I'm not getting my hopes up. While I'm a big fan of Brooks as a filmmaker, I'm lukewarm on Brooks as the creator of Broadway musicals.
Granted, I've never seen The Producers on stage, although I have watched the movie of the musical. But I did see Young Frankenstein on Broadway and I was disappointed. The tongue-in-cheek homage to horror films didn't translate well.
Unlike The Producers, which won 12 Tony Awards and ran for six years, the Tony-less Young Frankenstein got lukewarm reviews and closed in a little over a year.
But that hasn't deterred Brooks.
In an interview with the Canadian Press, he reveals that he's working on the Blazing Saddles musical, although he warns that the project might not pan out.
"I don't know - if I did it, I wouldn't rush to New York with it because the Times would say: 'Oh, oh dear, another movie converted and transmogrified into a musical.' ''
Personally, I'm not convinced a Blazing Saddles musical would work. I don't know whether some of the most well-known scenes in this sendup of Westerns would translate well to the stage. And then there's the film's use of a racial epithet. 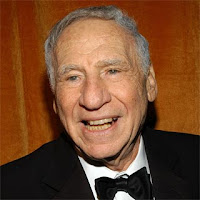 The best part of the interview, though, was the comparison Brooks made between film and theatre:
"Film takes an eternity - it takes an eternity! - and there are, like, infinite collaborations, which waters down anything.

"But the stage is: you throw your naked heart on the stage and they respond to it or not, and it's immediate. You send a bad joke out there and you get this big laugh or you grow wings and fly. It's just amazing."
Posted by Esther at 12:10 AM

I have to agree with you, I do not think that Blazing Saddles would translates well on stage. But I love the movie, and it would be great if was actually worth seeing.Im not sure how receptive audiences today would be to Brooks politically incorrect dialogue.
The Producers is a whole different story. I love the show, but the movie was terrible. It is closed now, but if it ever goes on tour again, see it.

Hey L.T., thanks for the comment! Yeah, I love the movie, too, but I think the politically incorrect dialogue might be a problem. Plus it's a tongue-in-cheek tribute to Westerns, just like Young Frankenstein is a tribute to horror movies. And maybe that doesn't work well on stage, I don't know. But like I said, if it makes Mel happy to write some songs for it, that's fine!

I saw The Producers on Broadway the day after it opened, and again 2 years ago at North Shore Music Theater in Beverly MA before it closed (and it appears to be reopening this summer, which is a good thing.)

The Producers was not a great show, and I'm sure if it deserved 12 Tonys, but it was a good show and I enjoyed it both times, but especially with Lane and Broderick. I did not see Young Frankenstein, but I'm surprised from what I read that it lasted a year.

I just saw The Rink at Musicals Tonight, and was very impressed with the production, and with the play itself. I'm surprised it didn't run longer, especially with Rivera and Minnelli.

For me, Young Frankenstein was just one of those cases where everyone else was laughing hysterically and I was only mildly amused. Although as I said in my review, I wasn't feeling well and had put in a full day of sightseeing in New York!

Also, part of it may be that I re-watched the movie a short time beforehand and Roger Bart just didn't compare to Gene Wilder. But I think the bigger problem was the movie has a horror-like tone whereas the musical was just kind of too cheery and sunny!

It would have been fun to see The Producers with Nathan and Matthew though.

And that is good news about the North Shore Music Theater. I've never been there, maybe someday.