Gratuitous Violins rating: *** out of ****
Remember when phone calls were relatively private affairs, conducted at home or in the office or at least in the semi-seclusion of a phone booth?
Now, it's all too easy to overhear conversations, to become privy to the intimate lives of strangers. Playwright Sarah Ruhl takes that premise to a hilarious extreme in Dead Man's Cell Phone, at Trinity Repertory Company through March 28. 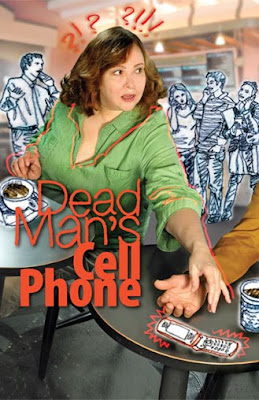 Like Ruhl's earlier work, The Clean House, which I saw at Trinity Rep in 2007, Dead Man's Cell Phone is full of sharp dialogue and quirky characters. She has some perceptive things to say about how we grieve, how technology has changed our lives and the connections we make. (Here's a profile of Ruhl from The New Yorker.)
As the play opens Jean (Janice Duclos), is sitting by herself in a cafe when a cell phone goes off at a nearby table. The phone's owner isn't answering it so she walks over and picks it up. Eventually, she realizes that the man has uh, expired.

For some inexplicable reason - loneliness, curiosity, a desire to help - Jean keeps the phone and continues to answer it.
Duclos is very funny as she gets more and more involved with the family of the dead man, whose name we learn is Gordon. It's like she can't stop herself. This is probably the most exciting thing that's ever happened to her.
She meets Gordon's "other woman," played with a terrific air of mystery by Rachael Warren; his long-suffering wife, Hermia (Phyllis Kay); and his very upper-crust mother, Mrs. Gottlieb. (Barbara Meek).
They want some reassurance that Gordon was thinking of them during his final moments. Jean, good-hearted soul that she is, weaves an ever-more elaborate tale that may not have much to do with reality but makes everyone feel a bit better.
Richard Donelly pulls double duty as Gordon, whom we meet at the beginning of Act II, and his mild-mannered brother Dwight. Donelly does such an amazing job portraying these two very different men that I almost couldn't believe it was the same person in both roles.
(Also, Donelly has an interesting background. Until he retired a few years ago, he worked as a plumber. You can read a Providence Phoenix story about him here.)
Under Beth Milles' direction, the first act moves along at a snappy pace in just under an hour.
The second act starts off well, with a very riveting and revealing monologue from Gordon. It's quite a shock. (Let's just say those snippets of cell phone conversations we overhear may not tell the whole story.)
After that, I felt like Dead Man's Cell Phone lost some steam. It takes a mystical, fantasy turn that seemed a little too incredible. Ruhl also tosses in a reference to the Holocaust that seemed totally gratuitous.
I liked the whimsical, quirky quality to Ruhl's writing. But a little bit of whimsy goes a long way.
Posted by Esther at 12:15 AM

Great review, Esther. My husband and I will be seeing this on Saturday. I've been excited to see it since I Trinity's 2001-2010 season was first publicized. Too bad it lost it at the end, though.

Thanks, Pam! I did enjoy it - I thought it was funny and there were some excellent performances. And I know Sarah Ruhl is kind of a quirky writer. It just got a little too outlandish at the end for me. But everyone sees things differently. I'll be interested to hear what you think.

I'm sorry I'm going to miss this. The reviews have been great and it sounds like fun. Can't go to everything, I guess, unless you're YOU! :-)

Hey Sandy, thanks for the comment! It is a fun show, despite my concerns about the second act. Believe me, I don't get to everything. I wish I could!

Well I saw Dead Man's Cell Phone last night and I have to say that your review is right on. The first half was fun and funny. The second half - not so much. I don't understand the need to make Gordon's career such an important part of the story. And why THAT career. (I don't want to say too much and spoil it for any one else). It almost seems as though Ruhl couldn't decide what topic to tackle - cell phones and their impersonal nature or this seedy business. Huh? While the acting was terrific, I was disappointed in this show. :(

Hey Pam, thanks for coming back with your comments. I agree that Ruhl seems to make the story about something else entirely in Act II. It comes from out of left field, it's bizarre and didn't work for me either. But like you said, I did enjoy the acting, especially Richard Donelly as Gordon/Dwight. Watching him play two such completely different characters was amazing. Well, The Odd Couple is up next and I'm really looking forward to that one!

I'm looking forward to The Odd Couple as well. So is my husband. He attends the Trinity shows with me since we attend with another couple, but theater is really not his thing. But, he LOVES The Odd Couple (the original movie and the TV show). When he saw this play in their lineup he was actually
excited to see it. We've both been looking forward to it for quite some time.