Gratuitous Violins rating: ***1/2 out of ****
I'd never seen The Glass Menagerie but I knew the shorthand: domineering mother, literary-minded son, unstable daughter, long-awaited gentleman caller.
Still, watching actors bring Tennessee Williams' characters to life so vividly at the Gamm Theatre made me realize how little I really knew about the play. This is an absorbing, intimate production, made more so by seeing it in a 137-seat theatre, nearly filled on a rainy Sunday. 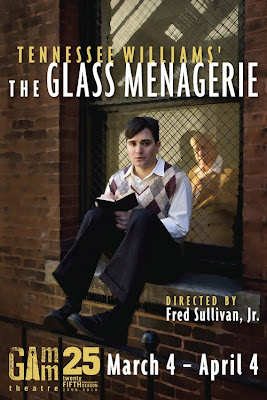 The story takes place in St. Louis in the 1930s, in the living and dining room of a drab apartment that designer Patrick Lynch has decorated with some well-worn furniture and an old phonograph.
It looks out onto a brick wall and a fire escape, apt metaphors for the Wingfield family because mother Amanda, son Tom and daughter Laura are all trying to escape from something.
And each of the actors playing them is just pitch perfect:
Gamm veteran Wendy Overly is Amanda, a faded Southern beauty wistfully recalling her comfortable girlhood, when she was courted by an abundance of promising gentlemen callers.
She ended up marrying a charmer who worked for the phone company, "a telephone man who fell in love with long distance," and abandoned his wife and children to a dreary, tenuous existence.
Marc Dante Mancini is Tom, an aspiring writer working at a warehouse job that he hates to support his family. He's angry, he drinks too much and he yearns to be free of his mother. Mancini makes you understand how trapped Tom feels and why that leads him to do some selfish things.
And Diana Buirski is a revelation as daughter Laura, capturing her character's emotional and physical fragility so well. She's a childlike young adult, painfully shy and unable to interact with the world, happiest listening to records on the phonograph and playing with her glass figurines. It's no wonder that her mother is fearful for her future.
In stark contrast is Jim O'Connor, a coworker Tom brings home for dinner as a potential suitor for Laura. As Jim, Kelby Akin exudes confidence and optimism. He seems to be everything the Wingfields are not.
Parts of the story are narrated by Tom years later. Director Fred Sullivan Jr. has split the roles and I think it's effective. Sam Babbitt is the older Tom, hovering around the edge of the stage, a drink in hand, watching his youth play out.
The Glass Menagerie is a memory play - Williams was born in Mississippi and spent part of his childhood in St. Louis. And his sister Rose suffered from debilitating mental illness. So this is clearly about his family and his first stirrings as a writer.
At the heart of the play is Amanda Wingfield's relationship with her children. And it's painful - especially when the shouting turns to shrieking. Each of these people is desperate, Amanda to find a husband who will take care of her daughter, Tom to escape his mundane life and Laura to escape from the world to a place where she feels secure.
Despite the sadness, there's more humor than I expected. Although I did find the laughter inappropriate on occasion, especially in the scene where Laura hides under the table because she's too frightened to open the door when her brother brings Jim home.
There's also a great deal of tenderness in The Glass Menagerie. Williams has crafted his characters with such care that I did feel for what each one was going through. Amid all the shouting and anger and hurt and delusions is a great deal of love.
Posted by Esther at 6:20 PM

Nice review. I've never seen "Menagerie" onstage before, either. Tennessee Williams has such a way with tragic, flawed characters, doesn't he?

I read this play in HS and I've been anxiously awaiting seeing it at the Gamm. Now I'm on the edge of my seat. Great review. It sounds fabulous. I'm thinking about rereading the play before I see it. What are your thoughts on that? I have a friend who doesn't read (or reread) plays before seeing them live because she wants to experience the play as something "new". I'm trying to decide how I feel about that.

Thanks Bob! Yes, the characters were so well-defined. Definitely tragic and flawed and interesting. They really draw you in. I'd like to see some more of Tennessee Williams' plays on stage now.

Hey Pam, thanks for the kind words. I read A Moon for the Misbegotten before I saw it on Broadway with Kevin Spacey. (My first Broadway show!) Then I watched it on VHS with Colleen Dewhurst and Jason Robards. And I really wish I had waited. I knew way too much going in. So I would wait. Having said that, I am an information junkie and I don't always practice what I preach! But if you've already read the play, it might not matter.

I saw this play on Friday night and I absolutley LOVED it. It's the best play I think I've ever seen. The first time I've ever felt compelled to jump to my feet at the conclusion and clap long and hard. Your review is pitch perfect. I couldn't agree more with your depiciton of the characters, the story, the sets, etc. Did I say I LOVED it!?

Hey Pam, thanks for reporting back! And I'm glad you loved it as much as I did. I've seen a couple of the movie versions of Tennessee Williams' plays, "A Streetcar Named Desire" and "Cat on a Hot Tin Roof," but this was my first chance to see one on stage. And it's such a terrific production, the actors truly created memorable characters. It makes me even more excited about the Gamm's new season.