I can't believe I'm going to have a second chance to see Angela Lansbury on Broadway! 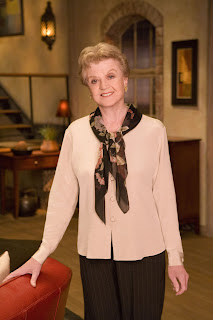 Ponder this: she's away from Broadway for nearly 25 years, returns in 2007 - the very same year I attend my first show on Broadway - and now is about grace the New York stage again, for the second time in two years. Coincidence?

I loved Lansbury and Marian Seldes in 2007's Deuce, where they portrayed former professional tennis players looking back on their lives. What terrific conversation! What memorable characters! Deuce is simply one of the most enjoyable experiences I've spent at the theatre. It was 90 minutes of pure joy and I could have listened to them talk for another 90 minutes.

And now comes word that Lansbury will join British film actor Rupert Everett and Christine Ebersole in a revival of Noel Coward's Blithe Spirit, which begins previews in February. I was on the fence about this one. I saw a production of Blithe Spirit earlier this year and while it was good, it didn't quite grab me.

But Angela Lansbury changes everything. She'll play Madame Arcati, the psychic who conducts a seance at the home of a novelist, played by Everett, who hopes to use it as material for a book. Arcati ends up summoning the spirit of his late wife, who will be portrayed by Ebersole.

In addition to Blithe Spirit, 2009 will bring the Broadway premiere of the new musical 9 to 5, on the heels of its Los Angeles tryout. Plus, revivals of Hair, Guys and Dolls and West Side Story. Plus, two more play revivals: David Hyde Pierce in Accent on Youth and Matthew Broderick, whom I've never seen on stage, in The Philanthropist.

Toss in a couple of new plays and I'll be very happy. I probably won't get to see the political play Farragut North, with Chris Noth and John Gallagher Jr., off-Broadway, so I'm crossing my fingers that it'll transfer. I'd love to see Jeremy Irons and Joan Allen in Michael Jacobs' play Impressionism, described as "the story of a world traveling photojournalist and a New York gallery owner who discover each other and also that there might be an art to repairing broken lives."

Okay, I know we're not even through fall yet, but I think there's quite a bit to look forward to on Broadway in the spring. (In my next life, I definitely want to come back as a New Yorker.)
Posted by Esther at 12:19 AM

Instead of living in NYC in your next life, how about for the rest of your life??!

Oh, if only I were young and free again!

That woman is my hero. I've only seen snippets of Blithe Spirit, but I think it's going to be very funny.

Hey Katie,
Thanks for the comment. The local production of Blithe Spirit that I saw was good but for some reason, I wasn't laughing as much as everyone else around me. Although there were definitely some great moments. But comedy is hard and maybe it takes more to make me laugh, I don't know.

But I'm looking forward to giving the play another chance, with Angela Lansbury! It was wonderful to see her on stage in 2007, and I know she'll be great.

I hope you get a chance to visit New York in the spring and see it, too. There are some terrific shows coming up.