The Beatles Love on the big screen 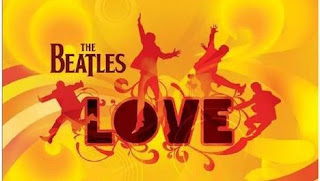 I've been curious about The Beatles Love ever since Steve on Broadway took in the Cirque du Soleil production in Las Vegas last year and gave it a glowing review.

Well, I'm not likely to get to Las Vegas anytime soon, but later this month, there's going to be a one-night screening of All Together Now, a documentary about the making of Love. It'll be screened at select theatres nationwide on Oct. 20 and then released on dvd on Oct. 21.

Okay, two things. First, I couldn't find any theatres in my area that are showing the documentary. Hopefully, more sites will be added over the next week. I mean really, there's nothing at all listed for Rhode Island or Massachusetts. Second, apparently the dvd will be available only at Best Buy. These exclusivity deals seem to be a growing trend. For example, Barnes & Noble sells the current Broadway revival recordings of Gypsy and South Pacific with bonus tracks not available anywhere else.

According to the documentary's Web site, All Together Now is a detailed look at the project, from its birth through the friendship between the late Beatle George Harrison and Cirque cofounder Guy Laliberte, to the contributions of the surviving Beatles and producer George Martin, to the construction of a unique stage and sound system at the Mirage Hotel in Las Vegas. The early stages were all filmed, as were the first rehearsals at the Mirage's theatre, where the show has been playing since 2006.

In addition to the 84-minute documentary, dvd bonus features include a 22-minute segment called "Changing the Music," a look at the decision to rework and remix the Beatles songs for the show; "Music in the Theatre," 9 minutes, creating the show's audio design; and "Making Love," 10 minutes, a look at the art direction, costumes, props, imagery and the use of the Beatles' voices.
Posted by Esther at 12:07 AM