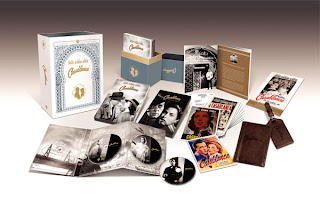 To upgrade or not to upgrade, that's always the question.

Casablanca is my favorite movie, so naturally I have three copies of it - a VHS tape I bought years ago, a relatively bare-bones release I got as one of my free selections when I joined the Columbia DVD Club, and the two-disc Special Edition that came out in 2003.

Well, apparently Warner Home Video has come to the conclusion that the Special Edition wasn't quite special enough. So a new, repackaged Casablanca, the Ultimate Collector's Edition, is coming out on Dec. 2, just in time for the holidays!

The premium gift set is elegantly boxed in an intricate laser-cut Moroccan design and will include such collectibles as replicas of actual props (Victor Laszlo's "Letter of Transit") as well as a number of Warner studio documents (an executive's letter commanding a new PR image for Bogart from gangster to romantic lead; a note from producer Hal Wallis re-titling the film to Casablanca; and a memo from Wallis to Jack Warner strongly urging casting Bogart over George Raft). The DVD set will also contain a branded passport holder, luggage tag, photo book and a mail-in offer for a reproduction of the original movie poster. Additionally, with more than seven hours of bonus features along with a documentary on Jack Warner, no matter how often one has seen the unforgettable classic, there's sure to be something to enrich the experience.

I'm kind of torn. Normally I'm immune to these repackagings of my favorite movies with their bonus featurettes, making-of-documentaries and newly recorded screen-specific commentaries.

But I'd like to have my very own letters of transit and the Jack Warner documentary sounds interesting. I've always been a Humphrey Bogart fan and the very first purchase I made for my college dorm room was a poster of The Maltese Falcon. Sadly, I no longer have it, but a Casablanca one would be a nice replacement.

Still, I don't really need another copy of Casablanca. It's not like 2008 marks a noteworthy anniversary. But this is the "ultimate edition." If I don't buy it, I may regret it. Maybe not today, maybe not tomorrow, but soon, and for the rest of my life.

Plus, this will be the last one, right? I mean, after "ultimate," where else can you go? Oh wait, 2017 will mark the 75th anniversary of Casablanca's 1942 release. I guess there'll be at least one more.
Posted by Esther at 1:23 PM

Hmm, you could buy it but then when you eventually switch to a Blu-ray disc player, you'll need to get it again!

Blu-ray?! I don't need no stinkin Blu-ray! (Sorry, just trying to keep the Bogie analogy going.) Seriously though, that's a good point. I hadn't considered Blu-ray. Yikes! I'm not convinced I'll ever need a Blu-ray dvd player, though. At least not until I have a living room with enough space for a 103-inch plasma tv!