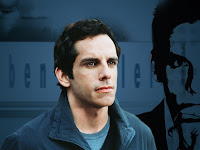 You know how you're idly surfing the Internet and one thing leads to another and you pick up some interesting bit of information that you were completely ignorant of a few minutes earlier? Well, that happened to me this weekend. I was surprised to learn that Ben Stiller has a Broadway credit on his resume.

Stiller, who was 20 years old at the time, portrayed Ronnie Shaughnessy in John Guare's play The House of Blue Leaves when it debuted on Broadway in 1986. Coincidentally, Stiller's mother, Anne Meara, was in the initial, off-Broadway production, in 1971. Hmmm, I bet the connection didn't hurt.

If only I had access to the Wayback Machine because this is one of those shows I really wish I'd been able to see during its original Broadway run. I think Stiller is a very funny guy (Along Came Polly, There's Something About Mary, Meet the Parents), despite being in some lame comedies (Zoolander, Dodgeball.) The opening-night cast also included John Mahoney, Julie Hagerty (Wow, of Airplane! fame. I never knew she'd been on Broadway either), Swoosie Kurtz and Stockard Channing.

The House of Blue Leaves takes place in Queens on Oct. 4, 1965, the day Pope Paul VI visited New York City. It's described as a black comedy featuring nuns, a political bombing, a soldier headed for Vietnam (Stiller), a zookeeper who dreams of making it big as a songwriter in Hollywood (Mahoney) and his schizophrenic wife, Bananas (Kurtz). Channing played Mahoney's mistress and Hagerty, a deaf Hollywood starlet, a role described by Frank Rich in his New York Times review as "deliciously acted." (He doesn't have much to say about Stiller's performance).

The play opened on April 29, 1986, at Lincoln Center's Vivian Beaumont Theatre, then moved to the Plymouth Theatre (now the Schoenfeld) on Oct. 16, before closing on March 15, 1987, after 398 performances. It won four Tony awards, including for Mahoney and Kurtz, as well as for scenic designer Tony Walton and director Jerry Zaks. A taped version of the Broadway production aired on PBS in 1987 but, sadly, it doesn't seem to be available on VHS or dvd.

Ben Stiller hasn't made it back to Broadway, but that role did help launch his career in an unexpected way. A satirical film he made with Blue Leaves costar John Mahoney came to the attention of Saturday Night Live producer Lorne Michaels, who offered him a spot as a writer. Stiller didn't end up staying long at SNL but he was on his way to movie stardom.
Posted by Esther at 12:06 AM

He may not have made it back to Broadway, but he was in a Neil LaBute play (off-Broadway) in '05.

Zoolander is lame? I laughed throughout the entire film

Thanks Aaron! I didn't know that. It would be great to see Ben Stiller on stage someday. I wonder how much of an impact he made in "The House of Blue Leaves," whether people who saw it knew that he was going to be a movie star? I'm hoping someone I've seen in a small role on stage will go on to great things so I can say I saw him when!

Well, ok, I admit it's been awhile since I've seen "Zoolander," so maybe lame was too harsh a word. I'm sure I laughed but I remember it being just an average comedy. I'm more of a fan of "Meet the Parents" and "Meet the Fockers."

It's also really hard to tell what people are going to become, even when they're in movies. For instance, I was flipping channels and caught a glimpse of Jack Black in "The Never Ending Story 3." How embarrassing for him. (As opposed to his role in "Cradle Will Rock," which set him against Bill Murray.)