Over at Theatreisms, Katie is in the midst of her month of musicals and a couple weeks ago, she shared her thoughts after listening to The Pajama Game. 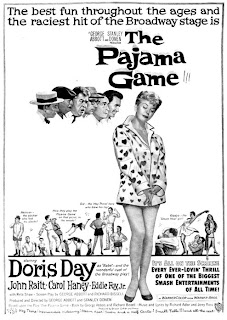 While I knew some of the songs and I was vaguely familiar with the plot, I'd never seen the show. So I put the 1957 movie at the top of my Netflix queue. On a crisp fall night, who doesn't like to snuggle up in front of the tv with a pair of warm, comfy pjs?

The movie version of the 1954 musical about labor strife at the Sleep-Tite pajama factory stars Doris Day and John Raitt. Day is feisty union activist Catherine "Babe" Williams and Raitt, reprising his Broadway role, is the handsome, stern new factory superintendent, Sid Sorokin. Day and Raitt spar then fall in love then spar some more then fall in love some more against the backdrop of workers fighting for their 7 1/2-cents-per-hour raise.

I really enjoyed The Pajama Game. It's a very sweet musical with lots of humor, intricately choreographed dance numbers and more than a whiff of nostalgia. I mean, do they even make pajamas in the United States anymore? Let's face it, nowadays, the factory would probably close down before giving the workers their raise. (Plus, I spent one summer working in a factory and I don't think any of the women wore high heels!)

And when the workers sing about getting their raise, they figure out that in five years they'll have a grand total of an extra $852.74, enough to get:

"An automatic washing machine,
A years supply of gasoline,
Carpeting for the living room,
A vacuum instead of a blasted broom,
Not to mention a forty inch television set!"

So, the love story is nice and there are lots of funny, quirky secondary characters and great songs by Richard Adler and Jerry Ross, including the beautiful and sad "Hey There." But for me the main reason to watch this movie is Bob Fosse's amazing choreography.

For someone who loves big dance numbers, The Pajama Game really is a joy to watch. And I can't believe how many of them there are in this movie. My favorites include "Racing with the Clock" in the opening factory scene, "Once a Year Day" at the annual company picnic, "Steam Heat" at the union meeting and "7 1/2 Cents" at the labor rally. Okay, I love them all.

Usually, when I see a movie musical, I'm impressed by the way the choreography is bigger, bolder, even more elaborate, featuring more performers and taking me to locations that you can't get to in the theatre.

But The Pajama Game is one musical where I thought, wow, I'd love to be sitting in the orchestra and watching these numbers on a Broadway stage, feeling the energy of a crowded theatre, instead of sitting by myself in my apartment. (Unless I had a 103-inch plasma TV with surround sound, of course.)

The original Broadway production of The Pajama Game opened on May 13, 1954, and ran for 1,063 performances, winning the 1955 Tony award for Best Musical. Since then, there have been two revivals, the last one produced by The Roundabout Theatre Company in 2006 and starring Kelli O'Hara and Harry Connick Jr. I wish I'd been able to see that show.

Unfortunately, there probably won't be another revival for quite some time. But I know these things tend to come around again and again. Next time, I'll be ready.
Posted by Esther at 12:39 AM

It's quite an enjoyable film, one of my favorite movie musicals of a Broadway show. ("I'm Not at All in Love" is a fantastic number; and I love "There Once Was a Man").

Apparently both John Raitt and Janis Paige were told that either one but not both might potentially be cast in the film, because they needed a name actor for box office purposes. It was almost Paige's vehicle when it seemed that the producers had Frank Sinatra on board, but when he turned them down, the movie went to Doris Day and the rest is history.

Interestingly enough, both Day and Paige appeared together earlier in "Romance on the High Seas and later in the comedy "Please Don't Eat the Daisies" (which was based on Jean Kerr's book about a theatre critic and his family moving to the suburbs).

I saw the revival and it was enjoyable enough...however Kathleen Marshall is no Fosse so it lacked in the brilliance. The colors were fun. While Harry Connick Jr. was fun to look at and he sure can sing, it was painful watching him trying to dance and act. Kelli O'Hara was the revelation as she was just off the heels of playing a young lady of the 60s to suddenly a gorgeous woman of the 50s. Talk about versatility. She was everything. Overall though, it was an idiotic plot not worthy of the praise it received (read Tony for Best Revival). I, for one, shall stick with the movie and the lore of the original production - SHIRLEY MACLAINE! - and the original cast recording - except Janis Paige who never sang on pitch - and hope that nobody ever wastes much needed revival money on another revival of this one.

Thanks for the background, TAAL. I was just thinking how it's usually the actress who gets passed over when it comes time for the movie version, like Julie Andrews with My Fair Lady. But I didn't realize that Janis Paige almost had the part. I saw Please Don't Eat the Daisies years ago and loved it. I'll have to check it out again.

Thanks for the recap on the revival, Sarah. I didn't realize Harry Connick was lacking in the dancing and acting department. Having seen Kelli O'Hara in South Pacific, I can definitely picture her being amazing in The Pajama Game. Yeah, I agree the plot isn't much. But the dancing, wow! That would be the main reason I'd want to see this on stage. But you're right, it won't be as brilliant as the original. At least we have some great examples of Bob Fosse's work on dvd.