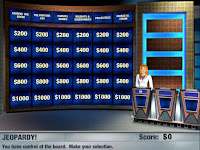 I had a Jeopardy! game when I was a kid and I loved it. I've always had a talent for remembering random, some would say trivial, facts. It even helped me get a job once. I impressed the person interviewing me by being one of the few women, he said, who knew that Don Larsen pitched the only perfect game in a World Series.

(It's only the important stuff that I tend to forget - like something really crucial that I was supposed to pick up at the supermarket. Yeah, I know, I should always make a list. But I always think I'll remember. Then I forget that I never remember.)

Anyway, thanks to Pop Candy, USA TODAY's useful compendium of pop culture news, I found a free online Jeopardy! game. The questions are from the 1960s, an homage to Mad Men, one of my favorite tv programs. And the 1960s is one of my favorite decades. Truly a perfect storm of trivia. On Friday, Jeopardy will have a special Mad Men category.

Unlike real Jeopardy!, this is multiple choice. And you're not playing against anyone or the computer. The categories included ad slogans, fads and fashions, news and New York nightlife. I "won" $8,800. I aced the Daily Double but, unfortunately, bombed out on Final Jeopardy.

Some of the questions were pretty easy: "A U.S.-backed invasion of this country in 1961 failed miserably." Some required a bit of thought: "Jackie Kennedy wore this designer's A-line dresses and pillbox hats." A couple of the answers sounded plausible but I guessed right. And at least one question was downright shocking: "In 1961, Fred Flintstone said this brand tastes good like a cigarette should."

Fred Flintstone hawking cigarettes?! I don't remember that from my childhood. Or maybe I do, because I knew the answer. Here's the ad:

The only time I watch Jeopardy is when there are celebrities competing...I have no tolerance for the ordinary smart people. ;)

I once sat through the taping of two episodes of "Jeopardy" back in the 80s. But I haven't watched it in years. Couldn't even tell you when it's on.

I used to watch this show religiously in high school and in college. I haven't watched since the Ken Jennings era.

I watched Jeopardy rather a lot when I was hanging out at my grandmother's house in Winnipeg, back when she had television. It was occasionally fun to try and guess the answers. I was like, 12, so I wasn't right terrifically often, but sometimes!

Also, I know I'm late to the party, but I tagged you in my blog too. Here you go.
http://thedorianmode.blogspot.com/2008/10/blog-post.html