Getting excited about Shrek

Sometimes, one performer can make the difference between "eh, not interested" and "I have to see this."

A couple of my fellow bloggers have already weighed in on the casting changes announced earlier this week for the Broadway-bound Shrek, which begins previews Nov. 8. But I want to send out a little blog love of my own to Daniel Breaker, who will be the musical's new Donkey, replacing Chester Gregory II.

While I do feel bad for Gregory, who was cut after the show's Seattle run, I guess that's part of what shows do in out-of-town tryouts. The creative team sees what works and what doesn't and makes changes. As a Broadway performer, I imagine you understand that's the way the system works and there's always a chance you'll be replaced. He's a veteran, talented actor and hopefully he'll be back on stage soon.

Up until this week, I had next to no interest in seeing Shrek. I watched the 2001 movie a few years ago, and it was okay. The best part was Eddie Murphy as the Donkey. (I wonder if this is a little dig at Murphy: In the New York Times story, he's referred to as the "Norbit auteur.") 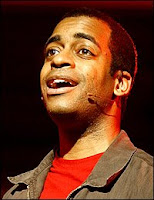 But Breaker's involvement with Shrek changes everything. He was just so memorable in the musical Passing Strange and I'd jump at the chance to see him in another role. Yes, I was that impressed. In fact, I liked everyone in the cast.

Breaker is a wonderfully expressive, physical actor. He can do so much just with the way he slouches in a chair. And he made the character of Youth, who journeys from Los Angeles to Amsterdam to Berlin in search of "the real" so sweet and appealing. One of my absolute favorite Broadway moments from 2008 was watching Breaker leap across the Belasco Theatre stage in imitation of a big Broadway dance number.

Here's a good Los Angeles Times interview with Breaker from June. He recalls his childhood in Germany as an Army brat, coming to New York to study at Juilliard, his Tony nomination for Passing Strange, and his impending fatherhood. And in The Washington Post in 2005, Breaker talks about his love for performing the classics.

According to his Facebook page, Breaker's son, Rory, was born last month. So even though he'll be long gone from Shrek by the time his son is old enough to start going to the theatre, it's kind of cool that Breaker's next Broadway role is based on a classic children's book.
Posted by Esther at 9:06 AM

I still have yet to be convinced hat this show will be worth my interest. Breaker helps though.

I actually made a yelp when I read the casting changes a few nights ago.

Now I REALLY want to see this. Breaker is AWESOME!

I have to agree with Vance. I'm really curious and excited to see what Daniel Breaker will do with this role. He's one of those performers I knew right away I wanted to see again.