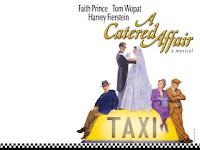 I've written before about my love for musicals with elaborate sets, rousing songs and intricately choreographed dance numbers. But that's not all I love. There's plenty of room in my musical theatre fandom to heap some praise on a small gem of a show like A Catered Affair.

This is a thoughtful musical that treats working-class characters in the Bronx in the 1950s with dignity and tenderness. Its themes of family and love and sacrifice resonated with me. John Bucchino's score is quite moving in the way that it articulates what the characters are thinking and feeling. And Harvey Fierstein has packed a lot of emotion, including a bit of humor, into his book, based on a movie by Gore Vidal and a teleplay by Paddy Chayefsky.

This is a musical that's really unlike any other I've seen over the past 18 months. A Catered Affair doesn't overreach. Under John Doyle's direction, it's a well-told slice of life about a family at a crossroads. I liked the way it showed the different dreams of people living under the same roof. And one thing I appreciated when I thought about it later, it's generally a very quiet musical, which was kind of nice for a change.

Aggie and Tom Hurley, played by Faith Prince and Tom Wopat, are coping with the loss of their soldier son, killed in Korea. Understandably, that grief contributes to the subdued mood of A Catered Affair, but I wouldn't describe it as a gloomy or somber musical. Just the opposite - I found it very hopeful and life-affirming.

Aggie wants to use the military's death benefit to give their daughter Janey the lavish wedding that she never had. But Tom has a dream of his own that he's been harboring all these years: he wants to buy a share of his taxi business. And their daughter, played so sweetly and with such determination by Leslie Kritzer, wants a simple wedding at city hall with her fiance, Ralph, a nicely low-key Matt Cavenaugh, so that the two can embark on a cross-country car trip.

Prince and Wopat portray Aggie and Tom with great sympathy and poignancy. Up until this point, they've been consumed by the details of daily life. They've probably spent the past 20 years not talking to each other. Now, for the first time in their marriage, they will be alone with each other. And all of that bottled-up emotion is coming out, when Aggie dreams about the perfect wedding in "Vision," or Tom's stunning and forceful "I Stayed."

The disagreement about what to do with the money reminded me of another working-class family in the 1950s, the African-American Youngers in A Raisin in the Sun. But seeing the folded, triangular-shaped American flag resting on the kitchen table also reminded me of stories I've read recently, of families who have lost a son or daughter in Iraq or Afghanistan and face a similar dilemma.

This was my first time seeing Harvey Fierstein on stage, and hearing that gravelly voice in person was thrilling. Initially, I had some reservations about his role. He plays Aggie's brother Winston, a "confirmed bachelor" in 1950s jargon. His comic turn seemed a bit out of place in a story about a grieving family. But the more I thought about it, the more I realized how essential he was to the story.

I think audiences really crave the relief that laughter provides. A Catered Affair is a pretty serious musical, but Fierstein's book wisely includes a few scenes that lighten the mood. In one of them, his anger at not being invited to the wedding leads to a drunken outburst that's sad and funny. Ok, maybe his voice isn't the best, but I thought he was so touching in his big song, "Coney Island."

There's another reason why Winston's role is so important. In the popular culture of the 1950s, blacks, Jews and gays are largely at the margins of society, or invisible. But of course, there were gay men in the 1950s. What A Catered Affair does is make these men visible by giving a voice to their lives and their loves and their dreams, by showing them as fully realized human beings, as part of supportive families. And that's the way it should be.

I also loved the way David Gallo's set and Zachary Borovay's projection design evoked New York City - from the pictures of tenements projected on the back wall, to Janey and Ralph's beautiful duet on a fire escape, "Don't ever stop saying I love you." This was an era when extended families lived with each other in cramped apartments, and when two young people would never think about taking a cross-country drive together unless they were married. I also loved the trio of neighborhood busybodies, played by Lori Wilner, Kristine Zbornik and Heather MacRae, who lean out of their windows to trade the latest gossip.

At its core, A Catered Affair is a story about love - between a husband and wife, between siblings, between parents and children, between two men. Even though we never actually see the object of Winston's affection, we know there is someone special in his life. It's a story about what family members do for each other, the sacrifices they make, it's about the things that get unsaid in a relationship, about a younger generation yearning to break free from their parents.

I wrestled with my rating for A Catered Affair, whether to give it 3 1/2 or 4 stars. But I'm giving it the benefit of the doubt. In the interest of full disclosure, a knee injury flared up soon after the show started, and I was in intense pain for the first 45 minutes. I spent the last 45 minutes standing at the back of the mezzanine in the Walter Kerr Theatre, which actually was a pretty good vantage point.

Since then, I've thought a lot about A Catered Affair. While some musicals are pretty forgettable, this one stayed with me. I went to the Web site and listened to some of the songs, and they moved me once again. Even the parts that gave me pause initially, like Winston's role, seemed to fit when I really thought about them. If it weren't for the knee pain, I think these things would have struck me while I was watching, and made a bigger impact.

In the end, A Catered Affair isn't the biggest, boldest or brashest musical I've ever seen, but it's certainly one of the most heartfelt.
Posted by Esther at 12:38 AM