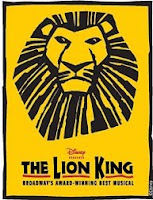 When it comes time for me to list my favorite theatrical moments of 2008, I don't think anything will top the opening 10 minutes of Disney's The Lion King. I've never seen anything like it and I probably never will again - unless I see The Lion King a second time.

Once a pair of giraffes ambled across the stage at Broadway's Minskoff Theatre, my jaw dropped in amazement. At first, I couldn't even figure out where the actors were in the costume. The parade of animals up the aisles seconds later - including birds and zebras and gazelles, even an elephant - was thrilling.

But it doesn't stop there. As cliched as it may sound, The Lion King is an incredible visual feast throughout its nearly three-hour running time. The grasslands of the African savanna, an eerie elephant graveyard, stampeding wildebeests, scary hyenas and circling vultures are all stunning to look at and created with terrific special effects, using video projection, elaborate costumes, masks and puppets.

The score, by Elton John and Tim Rice, with additional music and lyrics by Lebo M., Jay Rifkin, Hans Zimmer and Mark Mancina, covers a range of emotions so well, from the the stirring opening number, "The Circle of Life," to the joyous "I Just Can't Wait to Be King," the hilarious "Hakuna Matata," and the poignant "Can You Feel the Love Tonight." I love the way Jamaican-born Garth Fagan's spirited choreography combines classical and modern dance.

Think about it this way: it's as if you saw the 1994 animated movie, then had a vivid dream that night in which the story - and all of the animals in it - came to glorious life. Even then, you could never have imagined it this way. It's the type of thing you can only see in the theatre.

My most recent trip to New York began and ended with Shakespeare. First, I saw Patrick Stewart in Macbeth. While I found director Rupert Goold's take on a power-hungry Scottish general somewhat hard to follow, Julie Taymor's re-imagining of Shakespeare's play about a melancholy Danish prince is clear and compelling and inspired.

Of course, I'm not the first person to recognize the comparison between Hamlet and The Lion King. Both are about a young prince whose father is murdered at the hands of a jealous uncle. Both wrestle with whether or not to seek revenge for the murder. Both stories are about growing up and learning to accept responsibility. Both also have great comic elements and in each, the murdered king appears to the young prince.

In this version, Nathaniel Stampley's Mufasa is a commanding yet gentle king, who admonishes his young son for getting into mischief while reveling in his spunk. Danny Rutigliano and Jim Ferris are hilarious as Timon and Pumbaa, the easygoing meerkat and warthog who befriend Simba when he flees after his father's death. Kissy Simmons is a feisty, strong-willed adult Nala, who fights off Scar's advances and encourages Simba to return home. I liked Wallace Smith's adult Simba in Act II, although he didn't make quite as big an impact, maybe because his character's actions at first are less showy, and I don't think he gets as much stage time.

But for me, there were two standouts. Shavar McIntosh, a 10-year-old from Harlem making his Broadway debut, was terrific as young Simba. He was just a delight to watch, so full of energy and the total embodiment of a sweet yet mischief-prone little boy. And as Scar, Derek Smith makes a delicious villain, perfectly sly and and cunning and evil. He really seemed to be channeling Jeremy Irons' performance from the movie. (Smith also got booed at the curtain call, the first time I've ever heard that. Maybe he played the role a little too well).

I did have a few small quibbles with The Lion King. As I said, I didn't connect as much with the character of the adult Simba, perhaps because young Simba is simply a funnier, more physical role. In Irene Mecchi's book, adult Simba's struggle, at least until the climax, is more internal. But in a musical based on a beloved children's movie, I wasn't expecting a lot of "to be or not to be." And once in awhile, I thought the dancing went on a bit too long.

Still, those things weren't enough to give The Lion King anything less than my highest recommendation. It's such a unique visual spectacle, so theatrical, tremendously energetic and funny, always entertaining. And the lesson that the adult Simba learns - about how the people we love are always with us, even when they're no longer with us - is so moving.

Truly, it takes a very a very big village to raise a musical of this scale. All of the praise heaped on choreographer Garth Fagan, on director Julie Taymor, who designed the costumes, masks and puppets with Michael Curry, on Richard Hudson's scenic design, Donald Holder's lighting, and Michael Ward's hair and makeup is well-deserved. The Lion King won six Tony awards, for best musical, direction and for its costumes, lighting, set and choreography.

I've had kind of mixed feelings about Taymor's movies. I loved Frida, but I was disappointed with Across the Universe. Here, I can see where Taymor put her background in mythology, folklore, Asian drama and puppetry to great use. Just one small example: When Mufasa dies, ribbons fall out of the eyes of the lionesses to symbolize tears. It's so effective at illuminating grief, and I later learned that it's a Japanese bunraku puppet mourning technique.

What I've really come to appreciate about The Lion King is the way it folds so many influences - African rhythms, pop tunes, Japanese puppetry, classical and modern dance - into a Broadway musical.

It seems to me that this is a great example of the right way to adapt a movie for the stage - with limitless imagination. I don't know what it was like to see The Lion King when it debuted on Broadway in 1997, but I can report that 11 years later, the musical still packs a mighty roar.
Posted by Esther at 11:23 AM

I remember being wowed against my will thinking I was settling in for a hundred dollar puppet show. I was mightily impressed with the show when I saw it in Toronto a few years back. Have you seen Taymor's film Titus? It's quite a visual feast.

You know, I'm extremely squeamish and from what I've read of "Titus," I don't think it's for me!

"The Lion King" is definitely more than a puppet show, but even if it were just that, it's so well done, I think I'd still love it. In fact, I can't think of one show that couldn't be improved by adding a puppet or two!

Didn't I tell you so? If I didn't, then well, I told you so! The Lion King is worth every precious penny and I won't complain when it's time to take more of my little Little Loves to see it.

Esther, If The Lion King can't bring out one's inner child, I don't know what can. This is a beautifully executed show from start to finish, and Julie Taymor's direction was stunningly visionary. So glad you enjoyed!

Sarah,
You most definitely encouraged me to see "The Lion King" when I was looking for a Sunday night show. So thank-you. Now I know why Cody wants to see it a second time! And I know the girls will love it, too. You are such a wonderful aunt!

I'm really glad I saw "The Lion King" on Broadway, too, because I know that sometimes the elaborate sets have to be scaled down when a show goes on tour. So I saw the real thing!

Steve,
You're so right about "The Lion King" bringing out the inner child. I mean, my jaw really did drop when I saw those giraffes! And the parade of animals up the aisles was thrilling. You're also right about it being stunning and visionary, especially in scenes like the wildebeest stampede. It's so imaginative, unlike anything else I've seen on stage.

There are always so many new shows to see on Broadway, and they all sound so tempting, but I'm really glad I spent an evening with a classic. This is a case where the show really is the star. And after 11 years, this one is shining very brightly.