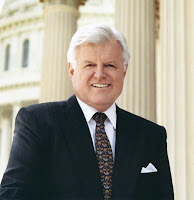 I was so saddened to read yesterday that Sen. Edward Kennedy has been diagnosed with a malignant brain tumor. Elected to the Senate in 1962, the Massachusetts Democrat has been tireless champion on issues that all Americans should care about regardless of their political leanings - health care, the minimum wage, education, civil rights.

I've only seen Ted Kennedy in person twice. In 1980, he spoke at Northeastern University in Boston when I was a student there. But four years earlier, during my first trip to Washington, D.C., I saw him on the floor of the Senate. I'll always remember it, because he was sporting a bright green tie in honor of St. Patrick's Day.

I went to Washington in 1976, when I was a junior in high school, under a Close Up Foundation program. Close-Up is a terrific nonprofit organization that promotes civic education. Under its auspices, thousands of students come to Washington every year for a week of sightseeing, a sense of how government works, and the role that they can play in it.

From my first view of the Capitol dome in the distance as our bus pulled into the city, I was hooked. This was before I went to college in Boston, before I'd done any traveling, and it was the first city I ever loved. I always wanted to live in Washington, but I never had the chance. I guess it'll always be one of my great unfulfilled ambitions. At least as an adult, I've had plenty of friends to visit there.

Washington is the best place in the world for someone who loves politics and history. I remember we met our congressmen and various government officials, toured the monuments and the Smithsonian's National Museum of American History (the beginning of my lifelong love affair with that museum). We even saw a show at Ford's Theatre, the gospel-themed musical Your Arm's Too Short to Box with God. (I don't recall anything else about it except the title).

At our hotel one morning, I saw a very tall, imposing-looking Muhammad Ali. One night, I peeked inside a banquet room where a dinner was taking place for Congress' Joint Economic Committee and had a chance to meet, among others, Alan Greenspan, (before he was Federal Reserve chairman) Coretta Scott King and Minnesota Sen. Hubert Humphrey. The former vice president was so gracious. He must have spotted my nametag because he called me by my first name, and introduced me to his wife, Muriel, who was standing next to him.

It was memorable week in many ways, including that glimpse of Senator Kennedy. While the outlook is grim, he's still with us, and I wish him the best.
Posted by Esther at 12:18 AM

I was fortunate to have met Senator Kennedy a couple of times, although I know he would never recall either occasion. I first met him during his campaign for president in 1980 and then again when I worked on Capitol Hill in the early 80s.

Seeing him on the floor of the United States Senate, along with other major leaders ranging from Barry Goldwater to Robert Byrd to Bob Dole told me that I had really arrived.

Regardless of one's political persuasion, we should all keep the Senator and his family in our thoughts and prayers.

Thank-you Steve. And you're absolutely right that everyone's thoughts and prayers are with Senator Kennedy and his family.

At a time like this, you realize that the things that bind us together as Americans, as human beings, are more important than the labels that divide us. This is a family coping with illness, and most of us, sadly, can relate.

I can just imagine how exciting it must have been to work on Capitol Hill. It's such a thrilling experience to walk into the Capitol for the first time. And this was before C-SPAN, before 24-hour news channels, when you couldn't just turn on your tv to see the House or Senate. So seeing Senator Kennedy was especially memorable.