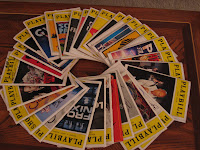 I've written before about some of the wonderful experiences I've had meeting performers after a Broadway show. Well, I don't want anyone to think that it's all smiles and puppies and kittens at the stage door. Last weekend I had the unique experience of being turned down for autographs by two Academy Award-winning actors in the space of less than 10 minutes.

On Saturday night, I saw The Country Girl at the Jacobs Theatre. It's a play about a washed-up, alcoholic actor, portrayed by Morgan Freeman, who's given a second chance at stardom. Frances McDormand plays his long-suffering wife and Peter Gallagher is the ambitious director who tries to keep Freeman's character from falling off the wagon.

Now, as I learned after Frost/Nixon, it's kind of tricky waiting for actors after a show at the Jacobs. While there is a stage door next to the entrance, most actors seem to leave through a service corridor next to the Golden Theatre, where Avenue Q is playing. So last spring, I missed Michael Sheen's quick exit that way, and Frank Langella apparently never came out at all. Maybe he's still there.

This time, I was prepared, leading my two theatergoing buddies, Steve on Broadway and the love of his life, to that spot. As we waited in line with a couple dozen eager fans, Oscar winner Morgan Freeman walked past us accompanied by a security person, who informed us that the actor wouldn't be signing autographs. Although he did deign to grace us with a smile.

Then a few minutes later, standing outside the Jacobs was Oscar winner Frances McDormand. My friends told me she wouldn't sign my Playbill either, but I approached her anyway. To her credit, Ms. McDormand was very polite. She was sorry, but told me, "I don't do press, I don't do photographs, I don't do autographs. I just work." (Hmmm, isn't doing press part of the work?)

I was 0 for 2, and I didn't even think about waiting to get turned down by Peter Gallagher. My tender ego couldn't stand any further rejection.

But as I've said before, the vast majority of Broadway performers are incredibly gracious, more than willing to sign autographs, pose for pictures and chat with their fans. Indeed, my first Broadway autograph was with two-time Academy Award winner Kevin Spacey after seeing him in A Moon for the Misbegotten last year. (So take that, Frances McDormand and Morgan Freeman!)

After that episode, my friends and I walked over to the Al Hirschfeld Theatre to say hello to the cast of the immensely enjoyable musical Curtains. I'm so glad we did, because my faith in humanity was soon gloriously restored.

Sadly, the show is closing on June 29, so these actors don't have much to gain in terms of goodwill by signing autographs, but they did it anyway, graciously greeting every fan who wanted to meet them. They were just as nice as they were last spring when I saw Curtains, my first-ever musical on Broadway.

I was so happy that I had a second chance to talk to the show's star, David Hyde Pierce. I congratulated him on winning a Tony award for his performance, thanked him for being so kind when I met him last year, and told him I hoped he'd be on Broadway again. If he's in a show, I definitely want to see it.

But wait, it gets even better.

After that, my buddies and I waited outside the Music Box Theatre for August: Osage County to let out. We had a terrific conversation with Rondi Reed, now a Tony nominee for her wonderful performance as Aunt Mattie Fae Aiken.

My friends had met her before, and she greeted us so warmly. Let me tell you, standing there on the sidewalk for more than a half-hour, until they actually shut off the theatre lights, laughing and chatting with Ms. Reed will always be one of my most memorable stage-door experiences. What a great actress and what a genuinely warm and friendly human being.

Despite my experience at The Country Girl, it was a great weekend for celebrity sightings. I saw former heavyweight champion George Foreman and Grammy winner John Legend leave the MTV studios, and I just missed Chris Rock. His car pulled away as I was crossing the street.

At the stage door after A Catered Affair Harvey Fierstein and Faith Prince were wonderful. But a highlight for me was when eagle-eyed Steve spotted Scott Wittman, who was waiting for Harvey, standing off to the side. Wittman, and his writing and life partner of more than 25 years, Marc Shaiman, are the Tony-winning composers of Hairspray.

I was a little hesitant about approaching Scott Wittman, but Steve gently encouraged me, and I'm so glad he did. It was pretty thrilling. (And I never would have recognized him on my own). After I saw Hairspray on tour last year, it immediately became one of my favorite musicals. I listen to the Broadway cast recording all the time.

I was completely tongue-tied, had no idea what to say, but Mr. Wittman could not have been nicer when I told him how much I loved Hairspray. He smiled such a sweet smile, crossed his hands over his heart and said, "thank-you." Then he pointed to Harvey and said that he was a big part of Hairspray's success. I wish I'd replied, I'd love to have seen the show with its original cast, but honestly, the story and the music are timeless to me.
Posted by Esther at 1:06 AM

oh shoot. we should have met up! I was a couple streets over at Spring Awakening!

Funny, i was just thinking about the YF snubs and thinking, maybe the rest of the cast might have gotten nominated if they signed autographs. (Fitzgerald and Martin were the only ones to come out the main door when I went last year and signed and took photos and all)...
hmm...

Hopefully we'll get a chance to meet on my next trip!

Christopher Fitzgerald, Andrea Martin and Sutton Foster all came out when I saw YF, and they were great. In fact, Christopher and Andrea were the best things about the show!

As for The Country Girl, obviously there's no requirement that an actor sign autographs, but you know, most of Broadway's business comes from out-of-town tourists. They don't see five or six shows, they see one or maybe two. We're in a recession and there are a lot of shows to choose from.

There weren't that many people waiting that Morgan Freeman and Frances McDormand couldn't have taken 15 minutes to sign autographs and created some goodwill for the show and for theater in general. I mean, they're the reason people came in the first place, not because they're huge Clifford Odets fans!

Esther, You know, I love both Morgan Freeman and Frances McDormand's acting - in fact, thanks to the latter, "Fargo" remains among my all-time favorite films.

I give them both credit for being pleasant, yet I couldn't help but wonder if there must be some sort of Academy Award-winner rationale (i.e. fear of people selling their autographs on EBay, etc.) behind their flat refusals.

But then I remembered how gracious another Oscar winner named Kevin Spacey was when I asked him to autograph an opening night Playbill (A Moon For The Misbegotten) for you. I've concluded that they apparently just can't be bothered with the fans who bought all those movie and theatre tickets through the years.

Yes, I grant that when it gets right down to it, what they do is "work," and I will also grant that they should not be pestered when they're simply walking down the street, but when it comes to making the time-honored exit from the theatre, the least they could do would be to take a few more minutes to recognize the people who have shown some love for their "work."

After all, that's why they call it show business.

Steve, you're absolutely right about Kevin Spacey and about everything else you said.

Kevin is known for being gracious to his fans. It was the same with David Hyde Pierce and the cast of Curtains when you got them to sign a souvenir programme for me. They were more than happy to do it.

In interviews, Kevin often talks about going to see Jack Lemmon in a play when he was in high school and getting to meet him afterward, and the impact that had on his life.

So if you go see Kevin Spacey at The Old Vic in London, where he's artistic director, you can go to the stage door afterward, get his autograph and talk to him for a minute. It's part of his ritual after every performance.

And you know what, it's very smart on his part. It probably takes him less than 30 minutes and it's one additional way of making people feel extra special about their theatergoing experience. And really, isn't that what it's all about?

I second what Steve said. When I saw Kevin Spacey for the Iceman Cometh at the Old Vic, he was SOOO nice and took pictures, signed everything and generally hung around until everyone got what they wanted.

Even Julia Roberts signed autographs and posed a few times for pics.

Anyways, I guess cause I see "celebrities" at work too, I have an opinion that it's all part of their work, and the truly "cool" ones know that and are pretty grounded and are understanding about it.

I totally understand when they are on daily life mode on the streets though. That's different.

Still, even when Patti was sick, Ms. LuPone signed playbills to be distributed outside. That's sweet! There's an actor who knows her audience!