Listening to A Catered Affair 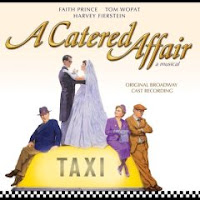 I've been listening to the Broadway cast recording of A Catered Affair for the past couple of days. After I see a show, listening to the music either confirms how I felt about it in the first place, or makes me reconsider. In this case, I love John Bucchino's songs even more.

I'd never heard of Bucchino before A Catered Affair, so I didn't quite know what to expect. But his melodies are absolutely beautiful. I know there's been some criticism that the songs in this musical all sound alike. It's true that on one level the music is similar - there aren't any upbeat numbers, for example. Honestly though, the music is so stirring, the similarity didn't bother me. In fact, I think it's a strength - it makes the 90-minute musical a cohesive whole.

But don't be misled - even though the music may sound similar, if you listen to the lyrics, they're all quite different in tone. Each one is told from the perspective of a different character in this working-class family in the Bronx in the 1950s. And Bucchino packs so much into those lyrics - they're little stories in song, and they reveal so much about the lives of these people.

Each song paints a very clear portrait of each of the characters - Tom and Aggie Hurley, who are grieving the death of their soldier son in Korea, their daughter Jane, so eager to begin married life, and Aggie's brother Winston, who's at a crossroads in his life.

One song that stood out for me even more on the cast recording was when Faith Prince's Aggie sings about "Our Only Daughter." She and her husband, played by Tom Wopat, placed all of their hopes and dreams on the back of their son, to the detriment of their daughter. Terrence was the one who got a chance to go to college, while their daughter, Jane, had to go to work.

It's only after their son is killed that Aggie realizes all of the sacrifices that Jane, played by Leslie Kritzer, has made for the family. "She never asked for more because life taught her that there was nothing more for our only daughter." It's that realization that makes Aggie want to use her son's military death benefit to give her daughter a lavish catered affair - the big wedding that she herself never had.

I've known families like this - who basically sacrificed everything for their son, and their daughter's needs came second. I think it's probably very realistic for that time period. I even remember 25 years ago having a roommate in college who told me that her brother was smarter - and it was better for a boy to have the brains.

Another moment I loved was when Harvey Fierstein's Uncle Winston sings "Coney Island." It really moved me when I heard it on stage. The only other time I'd heard him sing was on the Broadway cast recording of Hairspray. And he sounds so different here, like he's trying to modulate his famously gravelly voice.

When he sings to his sister about a long-ago ride on the roller coaster at Coney Island, "You're halfway through another ride, don't wait until the scary feelings pass. Just take a breath and open up your eyes right now," it's really sweet and tender. I was so touched by the sentiment behind those words, the love and caring between this brother and sister.

I think A Catered Affair is the type of show where I'll find something new whenever I listen to the score. And I definitely need to start listening to more of John Bucchino's music.
Posted by Esther at 12:41 PM