Tomorrow, Israelis will celebrate Yom Ha'atzmaut, Independence Day. I think this fits the definition of irony: Ten years ago, for the 50th anniversary, I was in Tel Aviv. This year, for the 60th, I'll be in New York City - that other Jewish homeland. To mark the occasion, here's something I wrote after I came back from my first trip to Israel, in August 1995.

I'm back from my first trip to Israel. Over two weeks, I stood on the Golan Heights, planted a tree in Jerusalem and dipped my toes in the Red Sea. We may have seen some things for only a few minutes, but we saw everything. I have the photos to prove it.

I'm not a religious person. I was afraid my view would be warped by having seen Exodus a few too many tim 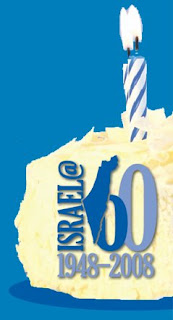 es. I thought maybe I was setting myself up to be disappointed. I told myself to be realistic. I didn't expend to find Paul Newman.

I needn't have worried. Israel is an incredibly compelling place. We had a great guide who not only knew the history, but spoke with such candor and love for his country that it was inspiring.

During dinner at a waterfront restaurant in Jaffa, driving on the highway to Tiberias, or walking around Jerusalem on a Sabbath afternoon Israel seemed like the most peaceful place on earth. I walked around Jerusalem, including the Old City, by myself and I felt completely safe.

I don't mean to poke holes in any long-held cultural stereotypes about Israelis being brusque, but everyone was friendly. Ok, there was one guy in a Tel Aviv store who got a little sarcastic when I asked him if he spoke English. "Only when I have to," he said. But when I told him it was my first day in Israel and I was afraid I'd broken my camera, he became the essence of helpfulness, fixing the problem with a little tape. And I never asked that question again.

Sometimes it seemed as though the word "line" didn't exist in Hebrew. I soon realized that if I wanted service in a crowded place, I'd have to speak up and hold my ground. But that's the same the world over.

I didn't even mind the famously stringent El Al security check at Kennedy Airport in New York. I tried to think what they'd ask to figure out whether I was Jewish without really coming out and asking me: Name three Woody Allen movies. What type of condiment would you put on a corned beef sandwich?

I knew it was for my own safety and I'm glad it was so thorough. But some of the questions did touch psychological sore spots left over from my childhood.

"Did you ever try to learn Hebrew?" I was asked.
"Yes," I replied.
"Why?"
"Because my parents made me go to Hebrew school."

After being asked for the third time why I wanted to go to Israel, I finally blurted out, "Because I'm Jewish and I've never been." That seemed to satisfy the security person. ("Aha," I imagined her thinking. "We got you to admit it, you assimilated, self-denying, non-observant American.")

When I finally got through it, I was sweating. But I felt like I had passed some test of my Jewishness. The Israelis though I was acceptable to enter their country. "Ok," further imagined them thinking, "we'll let you enter the Promised Land even though you complained about being forced to learn Hebrew, waited 36 years to decide that you wanted to come visit and we know you ate bacon yesterday."

What will I remember most?

I'll remember walking back from dinner along the promenade in Tel Aviv. It was nearly midnight and there were still plenty of people strolling. I thought, "I can't believe it. All of these people are Jewish."

I'll remember my bus ride in Jerusalem, disregarding a State Department advisory. When I asked someone at the tourist information center whether it was safe, he said "Sure. Most of the drivers are nice." That wasn't exactly what I was wondering, but I didn't want to admit that I was scared.

I was pretty nervous during the ride and I kept looking around the bus. I realized that this is what Israelis live with every day. When I saw my fellow passengers - small children, the elderly, Orthodox, secular, everyday working people - it brought the fear of terrorism home to me in a very personal way.

I wondered what it would be like seeing soldiers everywhere, and when a group of them walked into a museum in Tel Aviv, it did seem a little strange. Our guide explained that they were visiting as part of their training. Actually, I saw more soldiers in musems than anywhere else. After awhile, they were a natural part of the landscape, and they seemed so young.

There were some surprises. I was prepared to see soldiers, lots of men in yarmulkes, and American fast food. I wasn't prepared for the Volkswagens. They're everywhere.

I was amazed at the quietness of Jerusalem on a Saturday afternoon. I kept looking before I crossed a street, even though there were hardly any cars. Saturday seemed like Sunday and Sunday seemed like Monday.

Before I went, many people told me that Israel would feel like home, that I'd be amazed at seeing Jewish police officers and bus drivers. It wasn't quite like home - the bagels aren't as good - but it did feel comfortable.

When we visited the Western Wall, Judaism's holiest spot, our guide told us to remember that the stones weren't important. What's important is that we're here, that after Auschwitz, we survived. He talked about how Israel is gaining more international acceptance, coming out of its isolation. "It was like we were on another planet. Now, we can breathe like a normal country."

When I was growing up, being Jewish meant missing school for a few days every fall and explaining that I celebrated Hanukah instead of Christmas. It was never this much fun. I loved exploring the Roman ruins at Bet She'an, trekking up to the waterfall at Ein Gedi and browsing through the stores on Jerusalem's Ben Yehuda Street pedestrian mall. I know what our guide meant when he told us that in Israel, he didn't have to do anything to be Jewish.

Of course, two weeks as a tourist isn't the same as living in a country. And Israel is a real country, not a Jewish Disneyland. I talked to a few people about how difficult life can be, about their fear that the younger generation is losing a sense of purpose. I saw panhandlers and a few people sleeping on the sidewalk in Tel Aviv. There were a couple of bomb scares. But none of that negates what's been accomplished over the past 47 years, despite war, terrorism, international boycotts.

I feel a little embarrassed that I was nervous about visiting. I hope Israelis realize that their country still has the power to move people. And I hope that the 80-odd percent of American Jews who have never been there will visit. It doesn't matter whether they shop, sit on the beach or have a spiritual awakening.

I was moved in a way I never expected. I never expected to feel so deeply, so emotionally about the country, to the point that I was sobbing when I left. Oh yeah, I even saw Paul Newman - in the salad dressing aisle at the supermarket.
Posted by Esther at 9:22 AM