Which kind of traveler are you? 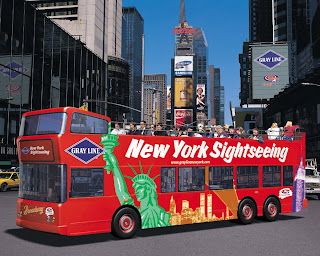 There was a good series of stories in the travel section of The Washington Post this weekend about visiting New York City - very appropriate, since that's where I'll be in a few days. Five writers each took a slightly different approach to spending 24 hours in the city that never sleeps.

They all boarded the 7:30 a.m. Bolt Bus from Washington, and 4 hours later, they were in Manhattan, each looking for their own particular kind of thrill: the Nosher, the Culture Hound, the Adventurer, Family Guy and Tourist Trapper.

The Adventurer had quite a workout. I'm not sure I want to sweat that much on vacation. She went on a bicycle ride through Central Park; visited The Cloisters, took a hip-hop class at the Alvin Ailey American Dance Theater; took in an improv show at the Upright Citizens Brigade; and tried the driving range at Chelsea Piers.

The Nosher tried a kosher Central Asian restaurant in the Diamond District, walked around the Essex Street Market before taking in a culinary tour of the Lower East Side, including pickles and Italian and Chinese baked goods, attended a performance of the Philip Glass opera Satyagraha at the Metropolitan Opera (Not sure how that fits in with noshing), then ended the evening with pizza and beer.

The Tourist Trapper watched the ice skaters at Rockefeller Center, walked to Macy's for some bargain-hunting, took the Duck Tour after several false starts due to fog, ducked into St. Patrick's Cathedral, watched the SonicVision show at the Hayden Planetarium and walked through Central Park. TT probably did the fewest number of things that I'd be interested in. I'm not really big on planetariums or Duck Tours. I did take a Circle Line cruise once around Manhattan, and that was enough.

The Culture Hound started off at the Rubin Museum of Art, (I've got to admit, that's a new one on me), did some antiques shopping in Chelsea, ate Italian comfort food at Cascina, on Ninth Avenue, went to see In the Heights at the Richard Rodgers Theatre, then topped off the evening with a performance at the Algonquin Hotel's Oak Room by a singer named Maude Maggart.

(Ok, this is more than a little weird. Culture Hound must have been tailing me. In March, I ate dinner at Cascina before going to see In the Heights, and afterward went to the Oak Room, for a concert by the talented and suave Scotsman Euan Morton).

The Family Guy started out at the Guggenheim Museum, followed by a trip to Kidfresh (described by the writer as perhaps the world's only grocery store for kids) for a free-range chicken sandwich in the shape of a teddy bear, stopped at the Children's Museum of Arts, and took a trip to Dylan's Candy Bar. The next day included visits to the Museum of American Finance (which sounds pretty interesting to me) and of course, the obligatory stop at Central Park.

I guess, like most people, I'm probably a combination of all these travelers - they all picked things I'd like to try. Actually, I think these divisions are kind of fluid. I mean, we've all gotta eat. Everyone likes Central Park. And who doesn't want to eat candy or go see a Broadway show?
Posted by Esther at 7:29 PM