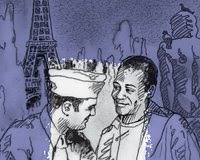 In Paris by Night, a new musical at Trinity Repertory Company, a trio of G.I.s arrive in the French capital in 1960 from their base in Germany on a three-day leave. Two of them end up falling for Marie, a nightclub singer, and the third finds himself drawn to a black American expatriate named Sam, who works as a tattoo artist.

That they find romance is not unusual. Americans have been coming to Paris and falling in love for a long time - or at least as long as movies have been made. The twist corrects an omission that Curt Columbus, who wrote the book and lyrics, says has bothered him ever since he was a boy in a small town in Pennsylvania "who was sure that no one loved like he did."

As he grew up, coming out to himself and others as a gay man, Columbus looked for images and role models in fiction and nonfiction. "But when I looked to my beloved musicals, I saw no evidence that people like me existed." He couldn't find a single musical that had, at its center, the story of two men falling in love. So, he decided to write one that would pay homage to another one of his obsessions: movies set in Paris.

The result, Paris by Night, is a sweet love story with engaging characters and some romantic, jazz-influenced music from Columbus and composers Amy Warren and Andre Pluess. (Warren is currently appearing in the acclaimed off-Broadway musical Adding Machine). The set, by Tony-winner Eugene Lee, evokes Paris - the parks, street life, cafes and dark, smoky nightclubs. Paris by Night opens with a scene that, like much of the musical, seems very cinematic. As Sam, a wonderful Joe Wilson Jr. sings "City of Night" while we watch Paris wake up - waiters set up tables at a cafe, an artist sets up his easel.

Sam has come to Paris from San Francisco after a relationship that ended unhappily. He's reunited with a college professor, an older gay man named Harry, played with a comic touch by Stephen Berenson, who acts as a kind of mentor. Sam has easily fallen into the routine of life in Paris, finding more acceptance as a black, gay man. He's also a strong, self-assured, somewhat solitary character who's given up hope that there's someone special for him in this world.

But when a young soldier and boxer named Buck wanders into Sam's tattoo parlor, there's an instant connection between the two. Buck, played by James Royce Edwards is so appealing - a West Virginia kid, wide-eyed and eager as a puppy, excited to be in Paris for the first time. Buck is so appreciative when Sam, realizing that he's staying in a fleabag, invites him to use the spare room in his apartment. At first, we're not sure how Buck feels about Sam - whether he sees him as anything more than a new friend. But it's clear they're growing closer.

It's nice to see the relationship between the two men unfold. There's a very funny musical number, "The Art of Le Cafe," where proprietor Henriette, played by Janice Duclos, initiates Buck into this key element of Parisian society as Sam looks on. When the two men climb the Eiffel Tower, Buck grabs the hand of the height-phobic Sam.

Buck's military buddies are the boorish, racist, homophobic Frank, from North Carolina, played by Mauro Hantman, and the sweet, considerate jazz fan Patrick, who hails from Chicago, played by Stephen Thorne. They're both in love with Rachael Warren's Marie, a warm-hearted chanteuse with a captivating voice, although Frank has the upper hand.

While Hantman and Thorne are very convincing, Frank is a little bit stereotypical as the racist ugly American. (In fact, Columbus gets in a few jabs about the difference between the French and Americans. Apparently, we shout too much.) Also, it's a little hard to figure out why Marie is attracted to Frank. But she believes that he loves her, and dreams that he'll marry her and bring her to the United States.

Under the direction of Birgitta Victorson, all of these stories unfold slowly, with emotion, sensitivity and humor. There's a great musical number, "American Man," in which Thorne's Patrick expertly channels Gene Kelly - doing a cartwheel, leaping on a bench, as he serenades Marie. The first act ends with a tender, passionate kiss between Buck and Sam - the kiss that I imagine Curt Columbus longed to see in all those old movie musicals. But that quiet, touching moment is shattered by the arrival of Frank, Patrick and Marie. Their relationship appears doomed.

Unfortunately, I didn't find Act II of Paris by Night quite as satisfying emotionally - at least until the end. The soldiers have all returned to Germany, and I really missed the interaction between them and Sam and Marie. The burgeoning love, the tension, the comic elements of three Americans in Paris, are what made the first part so enjoyable. Much of Act II is about Sam pining for Buck, and Marie and Harry trying to convince him that he should start living again. It just got a little repetitive and didn't quite have the same energy.

As Act II opens, Buck is back in Germany, facing off against a circle of boxers. After seeing him in his uniform, it was kind of strange to find Edwards in boxing trunks and high-top sneakers. In fact, the whole scene seemed a bit strange. Then, there's Marie's dance routine in a nightclub, "Yankee Rhythm," that was interesting to watch, although I couldn't figure out why it was there exactly, other than as an homage to Bob Fosse.

But things pick up, and Paris by Night, regains its spark, when Buck returns to the city for a boxing match, accompanied by Frank and Patrick. Although I hate boxing, it was pretty interesting to watch the stylized staged fighting. Plus, the bigoted, bullying Frank gets his comeuppance in a way that's very satisfying, even if it usually only happens in movies. It's a scene designed to elicit a cheer from the audience, and one that Columbus must have taken great delight in writing.

And well, if you love musicals and Paris the way Curt Columbus does, the ending probably won't come as a complete surprise. After all, they don't call it the City of Love for nothing.
Posted by Esther at 12:14 AM