A front row seat with my laptop

Well, I had fun watching and tweeting the Drama Desk awards last night even though the streaming video kept freezing. 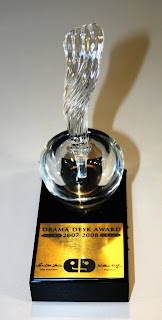 The Drama Desk, made up of theatre critics, writers and editors, puts Broadway and off-Broadway shows in the same categories. It also recognizes Outstanding Ensemble Performances and separates the score category into music and lyrics.

As Tom O'Neil notes in the Los Angeles Times, it's usually the Broadway shows that end up with the lion's share of the honors. This year was no different - Billy Elliot was the big winner. The list is here. It does seem a little unfair to pit Broadway and off-Broadway against each other - especially in categories like set design - were Broadway shows have much bigger budgets.

O'Neil's not exactly a big fan of the awards, referring to their "sagging reputation." Still, I enjoyed watching them and seeing some of my favorite performers give their acceptance speeches.

I know there's been discussion in the past about the Tony awards recognizing ensemble work. But separating music and lyrics seems a little odd to me. Isn't the whole point of musical theatre that the music and lyrics work together?

Tonight, it's the 54th annual Obie Awards, presented by The Village Voice and hosted by Martha Plimpton and Daniel Breaker.

The Obies, honoring excellence off-Broadway, are also being streamed live, beginning at 8 p.m. Eastern Time, and I may check them out. Anne Hathaway is supposed to be among the presenters.

Plus, this is where you'll see the stars of tomorrow. If you check out the story at Playbill, there's a list of some of the previous winners - people like Meryl Streep, Dustin Hoffman and James Earl Jones. And I always like to get a head start on my stargazing.
Posted by Esther at 9:03 AM

for more detail on laptops log on to http://www.naaptol.com/buy-online/WO-shopping-best-deals-W13O/computers_-_peripherals/laptops.html

for more detail on laptops log on to http://www.naaptol.com/buy-online/WO-shopping-best-deals-W13O/computers_-_peripherals/laptops.html