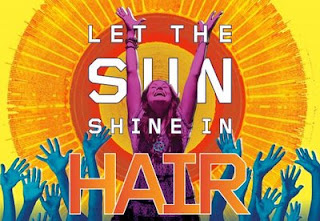 I knew there were going to be good vibes from the Broadway revival of Hair the moment I opened up my Playbill and those little white slips of paper fluttered out. Often that means disappointment - an understudy going on in place of a performer I really wanted to see.

This time, just the opposite happened. An actress I was really looking forward to seeing but who only had a small part, Saycon Sengbloh, was going to play a bigger role. In fact, as Dionne, she'd be opening the show, singing "Aquarius."

I was so excited and that bit of good fortune turned out to be only the beginning of an evening that I will never forget. I've seen so many wonderful shows over the past couple of years of theatergoing and this is one of the best - 2 1/2 hours of bliss that culminated in my Broadway debut.

First, there's the music, by Gerome Ragni, James Rado and Galt McDermot. I've always been hugely interested in the 1960s and I've always loved the music of Hair. Hearing - and watching - those songs performed live - wow, they sounded great. Sometimes, like on "Ain't Got No," the audience joined in and clapped along.

The original production of Hair opened at the Public Theater in 1967, then moved to Broadway a year later. When I watched the PBS documentary Broadway: The American Musical and saw the cast climbing over seats and interacting with the audience at the Biltmore Theatre, I wished I'd been able to see it then. It looked like so much fun.

Well, thanks to director Diane Paulus and choreographer Karole Armitage I got a sense of what that experience must have been like. This is one show where the actors don't simply break the fourth wall, they shatter it completely. They are everywhere in the mezzanine and orchestra of the Hirschfeld Theatre. And it is so much fun.

Hair tells the story of a tribe of hippies, led by a charismatic Will Swenson as Berger, living in New York City's East Village. Really, I enjoyed the whole cast - they are all so likeable, especially Gavin Creel's sweet and conflicted Claude, Bryce Ryness as the Mick Jagger-obsessed Woof and Caissie Levy as the privileged college student Sheila.

I can't even imagine how shocking Hair was in 1968 - and I'm not just talking about the nudity. The hippies are everything that must have outraged their Depression and World War II-era parents. They leave school and grow their hair long and use drugs and sing the praises of interracial love and question authority. Hovering ominously over it all for the young men is the draft and the Vietnam War.

Under Paulus' direction Hair truly evokes the spirit of the decade. The generation gap is on full display. This is funny, joyous musical but it also doesn't gloss over some of the decade's more powerful - and brutal moments.

Paulus saves her most stunning image for the end, which is slightly different from Ragni and Rado's book. But it's absolutely the right choice and it left me choked up. I don't think I'll listen to "The Flesh Failures/Let the Sun Shine In" the same way ever again.

Hair doesn't shy away from presenting a pretty strong criticism of American policy in Southeast Asia. I can't imagine a Broadway show - much less a musical - being so political today.

But this is far from a period piece. I think the message still resonates. Whether there's a draft or an all-volunteer Army, Hair reminds us that we should always exercise the utmost caution before sending American troops into harm's way.

The 1960s was a decade of convulsive change in American society. But it was also a time of celebration - when all sorts of barriers were being broken. Fittingly, Hair ends with the ultimate breaking of the barrier between audience and performer - an invitation to join the tribe onstage.

Despite my nerves, despite my fear that I'd look and feel foolish up there, I leaped at the chance. You know what - it didn't matter that I couldn't carry a tune and had no sense of rhythm. No one was judging me. It was a thrilling experience, an incredible adrenaline rush and it got even better when, to my surprise, Kevin joined me.

One of the best nights in the history of mankind, or rather me. Such a jubilant celebration of what theatre can and should be always.

So glad to have shared the debut with you!!!

I understand the William Morris agency was in the House and they want your telephone number.

Oh Kevin, you are so right. We were awesome. Just think, if Hair wins the Best Revival Tony, you and I and Steve and everyone else who went up on stage can say we played a small part in it!

And it was a transcendent experience, just an incredible example of the power of theatre - so poignant and joyous and you never knew where to look or what was going to happen next - including seeing you onstage!

Being onstage was surreal, just unbelievable. Definitely one of the most thrilling experiences of my life. I want to do it again!

Really, Steve - the William Morris Agency?! I think a star has been born!

Wow! Awesome! Your review is fantastic and I can't believe you had an opportunity to go up on stage. That is incredible. I bet I would have been too self-conscious to do it and then regretted it immediately and forevermore. I will remember this if I ever see Hair and the opportunity presents itself.

I thought I'd be too self-conscious but my friend SOB did it a week before and he encouraged me. And I just really wanted to see what it would feel like to be on a Broadway stage.

I figured I could always stand in back and be inconspicuous but really, it didn't matter. There were a couple hundred people up there and we were all having fun.

I think this production of Hair is going to be around for quite awhile and inviting the audience onstage is a part of the show. So if you get a chance to see it, definitely go up there and fulfill your Broadway dream!

You've been busy!! What a fantastic trip. Love reading your reviews.

Awww, thanks! It was a wonderful trip. And I'm going back for more shows during Tony weekend. Hope you can get to New York sometime soon. I definitely recommend Hair and God of Carnage. And if you go to Hair, definitely go on stage!

You're a superstar! The show sounds great and a lot of fun too. Great review, you're making me want to see it where that idea hadn't really been percolating.

Oh Dale, it's like 1960s fantasy camp for those of us who lived through the decade but were too young to enjoy it!

You've always been so sweet and supportive of my career! I hope that your experience at Hair was all that you hoped it'd be!

Hi Saycon, thank-you so much for the comment! What a sweet, wonderful surprise.

You probably don't remember but I saw the show a couple weeks ago on Sunday night and at the stage door, I told you I'd seen you as Celie in The Color Purple.

Yes, Hair was amazing - definitely everything I thought it would be and I definitely want to go back and see it again.