A theatre guy at the NEA 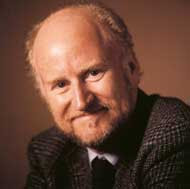 Okay, I'll admit I don't know much about the National Endowment for the Arts or its mandate. And I don't know very much about Rocco Landesman, the Broadway producer who's been tapped to head the organization. But that's never stopped me from having an opinion before! I've never met Landesman, I've only read interviews and watched him on a couple of Broadway-themed documentaries. But he seems like someone who will use the bully pulpit well, as a forceful advocate for the arts. And I'm excited that someone from the theatre will be running the NEA.

As president of Broadway's Jujamcyn Theaters, Landesman obviously comes from the commercial world. But he's got a doctorate in dramatic literature from Yale, so he's certainly been interested in the theatre from an artistic and intellectual standpoint, not just as a profit center.

Obviously, his mandate with the NEA will be much different than that of a commercial producer. And the role of the NEA is not to be a commercial entity. I think he's smart enough to realize the difference.

Here's a little background about the organization from its Web site:

"The National Endowment for the Arts (NEA) is a public agency dedicated to supporting excellence in the arts, both new and established; bringing the arts to all Americans; and providing leadership in arts education. Established by Congress in 1965 as an independent agency of the federal government, the Arts Endowment is the largest annual national funder of the arts, bringing great art to all 50 states, including rural areas, inner cities, and military bases."

A couple of my fellow bloggers, Modern Fabulousity and The Playgoer, who have much more knowledge about the theatre and arts world, have weighed in and they make some excellent points, both pro and con. I wish I were smart enough to have thought of them! Update: the Los Angeles Times offers another perspective, here.
Posted by Esther at 12:29 PM