Shockheaded Peter and the Addams Family

Add me to the list of bloggers excited about The Addams Family musical, which will have a two-month tryout in Chicago starting in November, before opening on Broadway April 8. 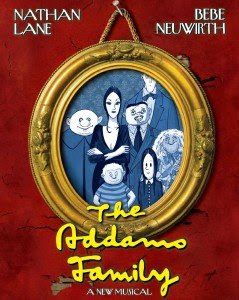 The cast does sound impressive, including Nathan Lane and Bebe Neuwirth as Gomez and Morticia Addams.

The score is from Andrew Lippa and the book, based on Charles Addams' ghoulish cartoons, is from Marshall Brickman and Rick Elice, of Jersey Boys.

But what's most intriguing to me is that Phelim McDermott and Julian Crouch of Improbable, a London-based theatre company, will handle the direction and design duties.

They were part of the team responsible for Shockheaded Peter, a show I'd never heard of before. It's based on a book of children's stories written in Germany in the 19th century that demonstrated, in very extreme ways, the consequences of bad behavior. Shockheaded Peter, with music from the British band Tiger Lillies had an off-Broadway run in 2005.

I found a clip from a British production. Now, I don't normally like scary stories and Shockheaded Peter is bizarre. But it's also visually stunning. And you don't need to watch the whole thing to get a sense of it:

The Addams Family is a very different project. Still, I am curious to see how McDermott and Crouch will put their stamp on it.

Their participation raises an interesting question: How do artists who are known for maybe more experimental, avant-garde work make the transition to mass entertainment? I mean, what's more mainstream than a big-budget Broadway musical?

Whatever they come up with, I'm hoping it'll be fun to watch.
Posted by Esther at 9:45 AM

I almost saw "Shockheaded Peter" eight years ago in Ann Arbor, but then 9/11 happened the week before the performance, and they canceled it.

It was a big show in the West End when I was there in 2000. While it's style suggest avant-garde, it really was a commercial hit -- which I'm guessing attracted the producers of Addams Family.

Addams Family with Nathan Lane and Bebe Neuwirth sounds fabulous! I hope it makes it to PPAC at some point!

I saw SP Off-Broadway and it was definitely a very unique theatrical experience to put it mildly.

Thanks, Robert. So sorry you missed out. But at least you'll get a first look at The Addams Family! Yeah, I can see why, if you were the producers, you might think it would be a good fit. Shockheaded Peter certainly does have a ghoulish, macabre look, as opposed to the sitcom style of the Addams Family tv series and movies. And I guess that's what they're striving for.

Pam, I'm sure it will come our way - although most likely with a different cast. Young Frankenstein is starting its tour two years after I saw it on Broadway. So you can probably expect the same lag time for The Addams Family.

Wow, SOB! Wish I'd been able to see it. Just from that video, it certainly seems like a unique theatrical experience. It reminded me a little of Moulin Rouge, kind of like an exaggerated, fantastical, dance hall atmosphere. The subject matter seems a little disturbing, too. I wonder how much of that unique style will show in in The Addams Family?

Who would not forget this TV series?!I guess almost everyone knows about it.

Thanks for the comment, Cath. I'm really looking forward to the musical. It'll be interesting to see how closely it resembles the tv series, if at all.

Did you know it was originally produced by Filmways, Inc. at General Service Studios in Hollywood, California. My favorite character Wednesday Friday Addams, Gomez and Morticia's daughter - who has the middle name of Friday. She is the youngest member (six years old) of the family, she is a strange yet sweet-natured little girl who pursues such hobbies as raising spiders and beheading dolls.I always wanted to buy the DVD collection.