Obamas do dinner and a Broadway show

“I am taking my wife to New York City,” the president said in the statement, “because I promised her during the campaign that I would take her to a Broadway show after it was all finished.” 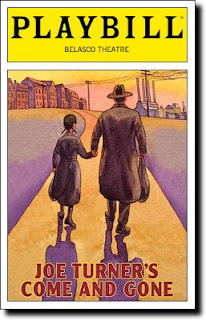 President and Mrs. Obama are in New York City tonight, where they dined at a restaurant called Blue Hill in Greenwich Village, then traveled to Times Square to take in the 8 p.m. performance of Joe Turner's Come and Gone at Broadway's Belasco Theatre.

How cool is it that of all things, Michelle Obama wanted her husband to promise to take her to a Broadway show after the campaign?! Pretty darn cool, if you ask me.

Of course, there are some naysayers:

"While the Obamas’ visit to New York was considered private, there was some very public criticism of the trip. The Republican National Committee suggested that that the outing was inappropriate and that Mr. Obama was out of touch, especially given the looming bankruptcy of General Motors.

The committee issued a press release on Saturday afternoon that read, “Putting on a show: Obamas wing it into the city for an evening out, while another iconic American company prepares for bankruptcy.”

I think the president and first lady are doing more for the economy by traveling to New York City for dinner and a show than they would hunkering down in the White House. They're supporting tourism and the arts, both of which employ a lot of people. And they're drawing attention to the work of August Wilson - a great American playwright.

Besides, what is he supposed to do tonight to prevent General Motors from declaring bankruptcy - require that every American go to their nearest GM dealer Monday morning and buy a new car?

I know we're in a recession but I don't expect the president to walk around in a hair shirt. Isn't his example better than Vice President Joe Biden telling us all to be very afraid?

I'm just sorry that I have lousy timing. I'll be at Joe Turner next Saturday night - missing the first couple by exactly one week. Still, it'll be my first August Wilson play and I'm pretty excited about it - even without the president in the house.
Posted by Esther at 11:15 PM

At this point, the republicans seem to be just crying foul to anything Obama does no matter what. I'm sure if the guy did something totally republican, like somehow illegalizing abortion, they'd all scream he was a hypocrite instead of being happy...

Hey Amanda! Yeah, I think you're right - it's like a kneejerk reaction. But I'm sure the Democrats do it, too.

I agree, they do. It drives me crazy when they do it, too. It doesn't take much to listen and learn before reacting, you know?