"This wedding ring means so much to me" 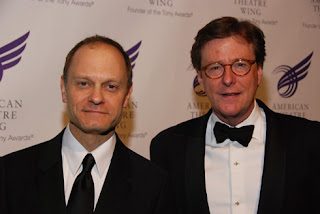 David Hyde Pierce and his husband, Brian Hargrove.
Look at those two men.

How could their commitment to each other, their ability to file a joint tax return and visit each other in the hospital no questions asked, possibly be a threat to anyone? In the debate over same-sex marriage, what could I possibly say that would be more eloquent and to the point than this:

"When we heard the minister say 'Now by the power vested in me by the State of California I pronounce you married,' something happened to us. And we realized, 25 years together, if not us, who? If not now, when?

On Oct. 24 we got married. At the beginning of November, the people of California got together and took a vote and said no, I'm sorry, that ring means nothing. When we were fighting against Proposition 8 in California, a lot of things have been said about that fight. Maybe we made some mistakes. Maybe the timing wasn't right. But people said we were complacent. I promise you, we were not."

David Hyde Pierce at the rally for marriage equality in New York City, talking about marrying his partner of 25 years, Brian Hargrove. You can watch his speech here.
Posted by Esther at 9:45 PM