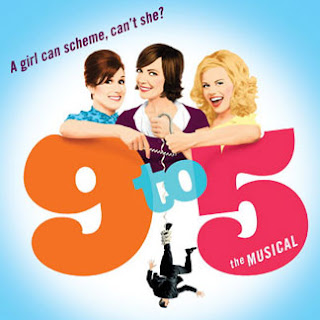 Before I saw 9 to 5, I knew that New York Times theatre critic Ben Brantley had written a pretty scathing review. After seeing it, I went back and reread what he wrote - he called 9 to 5 a "gaudy, empty musical."

I know that theatre fans can disagree and those passionate debates/arguments make the discussion interesting. But wow, did we see the same show?

I enjoyed 9 to 5 tremendously - it made me laugh and I think the story would resonate with anyone - male or female - who's ever felt unappreciated or mistreated on the job or passed over because they weren't "one of the boys."

Now, it's been years since I've seen the 1980 movie 9 to 5, - in fact, I probably haven't watched it since 1980. So I don't know how closely Patricia Resnick's book about three women trying to get the goods on their sexist boss hews to her screenplay but I'm guessing it's pretty close.

I loved Allison Janney as Violet Newstead, the sharp office manager who keeps things running but never gets credit for it. While I've seen her in a few movie roles, I only watched The West Wing a couple of times, so this really was my first introduction to the four-time Emmy winner and I thought she was terrific.

And Marc Kudisch is great as the unscrupulous, womanizing boss Franklin Hart Jr. It must be a physically demanding role, too, because Hart spends much of the show in some pretty uncomfortable circumstances but Kudisch handles it well.

Speaking of Dolly Parton, I really enjoyed her score. Of course the title song, written for the movie, is great and I'm not sure there's anything else that's quite as memorable and catchy. But I liked Janney's big number, "One of the Boys," and the three women in their Act I finale, "Shine Like the Sun."

The one thing that disappointed me a bit was Andy Blankenbuehler's choreography. I admired his Tony-winning work for In the Heights, which was so vibrant and exciting. But here, it just seemed a bit generic, nothing special.

For me, movie-to-musical adaptations have been a mixed bag. Some, like Hairspray, I think are brilliant and some, like Young Frankenstein, have left me sitting there wondering what everyone else found so amusing.

Others are in the middle - maybe not groundbreaking but thoroughly enjoyable. And for me, 9 to 5 is in that category. I had a great seat - third row on the aisle, left orchestra. I wanted to sit back and have fun - and I did.

Your review of the cast recording is much more positive than mine was. I was disappointed. I'm sure it has to do with me not having seen the show, and basing my critique solely on the score.

Well, I actually don't have the cast recording yet. I was just basing my review on seeing the show. I am disappointed that it's closing. I know this is a minority opinion but I really enjoyed it. I had fun and the story resonated.

I did not love the show, but would have liked it to have a longer run on the strength of the cast. My sense was meh material partly redeemed by committed, energetic performances across the board.

Do you know the musical version of Woman Of The Year? Not a great musical, either, and also with a lead who couldn't sing or dance. But while I can't remember a note of One Of The Boys from 9 to 5, I can't get OOTB from Woman Of The Year out of my head. That song in 9 to 5 immediately put me in mind of Woman of the Year, and not to 9 to 5's benefit.

Thanks for the comment. No, I've never seen or heard the music from "Woman of the Year." But someone else mentioned it in connection with Allison Janney's big number in "9 to 5."