Will War Horse hoof it to New York? 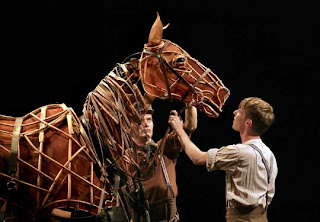 Okay, I know it's not going to happen for a couple of years but this is so exciting: the producers of War Horse are planning to bring the play, currently a hit in London's West End, to New York in 2011, according to this story in The New York Times.

"British and American producers plan to mount War Horse in New York in 2011 and are now looking at Broadway theaters and other locations, like the Park Avenue Armory, that would be large enough to house the show, said one of the producers, Bob Boyett. The ideal, by many accounts, would be the Vivian Beaumont Theater, with its wide thrust stage."
(Update February 2010: It's been announced that War Horse will be part of the 2010-2011 season for the Beaumont Theater at Lincoln Center. Performances begin March 17, 2011.)

The play, based on a book by British children's novelist Michael Morpurgo, is about a boy who goes searching for his beloved horse after the animal is sold to the cavalry during World War I.

In his review, the Telegraph's Charles Spencer said the story, adapted by Nick Stafford, "brilliantly captures not only the mysterious and intense relationship that can exist between humans and animals, but also the dreadful waste and terror of the Great War."

From everything I've read, all the photos and videos I've seen, this production, which began at Britain's National Theatre, looks terrific. And it has some amazingly lifelike and life-size horse puppets from South Africa's Handspring Puppet Company.