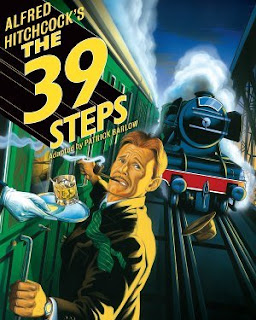 It's been nearly two years since I saw and raved about The 39 Steps at Boston's Huntington Theatre Company, during it's pre-Broadway warm-up.

I was so enthusiastic in an e-mail to Steve on Broadway that he encouraged me, as he'd done many times before, to start a blog. I'd always declined, thinking I didn't have anything to say, but this time I took the plunge. And my review became the first-ever Gratuitous Violins post.

So naturally, I've always had a soft spot for this plucky little British comedy. As the play moved from its limited Roundabout Theatre Company engagement to an open-ended run, I've followed its fortunes and always hoped that someday, I'd have a chance to revisit it on Broadway.

Well during my last trip I had a free Sunday afternoon and at about 20 minutes before curtain time, I walked up to the TKTS booth in Times Square to buy a half-price ticket. I'm so glad I did because The 39 Steps is just as funny and witty and inventive as I remembered it from Boston.

The story, adapted by Patrick Barlow, is an absolutely faithful and hilarious retelling of Alfred Hitchcock's 1935 black and white film about a man who finds himself caught up in an international spy ring. And it includes many clever shoutouts to the master of suspense.

Sean Mahon plays Richard Hannay, a suave, self-assured 1930s-type hero. And the lovely Jill Paice (from Curtains!) handles all the female roles, including a secret agent and a woman who gets involved with Hannay quite against her will.

Through some very quick changes, two other actors - Arnie Burton, who was in the show in Boston, and at my performance, Cameron Folmar, play all of the other characters - lots of them. And they are terrific. They play a big role in making The 39 Steps so much fun to watch.

One of the things I love about The 39 Steps is that it's so theatrical - with only four actors, minimal props and no fancy special effects, it relies a great deal on the imagination of the audience. I love how it does so much with so little. It's one of the most unique shows I've seen.

And not only does it re-create the Hitchcock movie, it re-creates the style and feel of the movie. It's like seeing a 1930s thriller on stage, only with a playful yet respectful nudge and a wink that you don't get from the original.

The show won two Tony awards, for Mic Pool's sound design and Kevin Adams' lighting. The first time, I was straining a bit to hear from the back of the orchestra. But in the 589-seat Helen Hayes Theatre, I could hear everything and I was really impressed with the range of sounds Pool has to create and how much they contributed to my enjoyment of the play.

There's always so much new to see on Broadway, not to mention off-Broadway, that I rarely get a chance to see a show I loved for the second time. I'm so glad I had that chance with The 39 Steps. And, if I ever have the opportunity, I'd even see it a third time.
Posted by Esther at 2:30 PM

Thanks, Kathy! And I think anyone who loves Hitchcock would enjoy this play.