I'm not a big circus fan but I was excited about the first visit to Providence by Cirque du Soleil. I knew the Montreal-based troupe's shows were visually stunning and filled with amazing acrobatics. 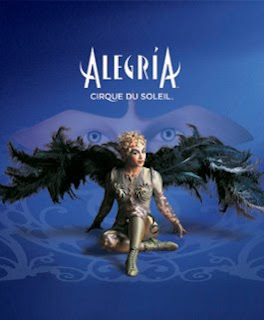 Cirque usually plays bigger markets than Providence but because of the recession, they're reaching out to new locations and smaller cities with 15-year-old Alegria. The next stop on this tour is Manchester, N.H.

Alegria means "jubilation" or "joy" in Spanish and the Cirque Web site describes the show as "a joyful rendez-vous with the beauty and power of the human body."

The aerialists and trampoline artists and contortionists were incredible. Watching a pair of trapeze artists was so breathtaking I felt a touch of vertigo as they flew high above me in the Dunkin' Donuts Center. And the baggy-suited clowns were pretty funny, especially with one routine involving a paper airplane.

With the music and the costumes, Cirque does a great job making the show look fantastical - like you've stumbled upon an imaginary world with these weird-looking characters who are part Alice in Wonderland, part Moulin Rouge. It really is a visual feast and I can see why Cirque is so popular worldwide - there's no language barrier to surmount.

Where I felt let down a little bit was in the storytelling itself. Alegria was great to look at but I wasn't sure what it all meant. If there was a plot, it escaped me. Maybe if I'd understood the lyrics to the songs, that would have helped.

Now I know what you're thinking: It's a circus, there's no plot!

But according to its Web site, Alegria is about "Power and the handing down of power over time, the evolution from ancient monarchies to modern democracies, old age, youth — it is against this backdrop that the characters of Alegría play out their lives. Kings' fools, minstrels, beggars, old aristocrats and children make up its universe, along with the clowns, who alone are able to resist the passing of time and the social transformations that accompany it.

Okay, maybe it was all a little bit over my head but honestly, I didn't get any of that.

To me, it all wore kind of thin after awhile - more spectacle than substance. Although I admit the spectacle is pretty terrific.
Posted by Esther at 4:00 PM

There's usually a "story" but not really. It's usually so esoteric and spacey that I feel it's more to slightly tie it all together than an actual storyline. It really is still a circus first things first. Although this was in the local stadium? Not the Grand Chapiteau? (their traveling yellow and blue circus tent?) I heard they changed a few to fit into stadium venues but I think the circus tent is still more intimate and "circus-like". OVO is the latest show (currently in MTL) and opens in Toronto later this summer, should be interesting. They're all kinda different and yet all kinda the same, but I say that in the best sense.

This was indoors, in an arena that's used for college basketball and minor-league hockey. (Although I know Cirque does tent shows. I think they've done them in the Boston area.)

Yeah, I guess it's like variations on a theme - all of the shows have clowns and acrobats and costumed characters. And the acrobats were thrilling to watch. I just enjoyed some more than others. I like the trapeze artists. The contortionists are painful to watch after a few minutes. ;-)

I don't think I'll get to Las Vegas anytime soon but I would like to see the Beatles' Love. At least with that one, I'd understand the songs!

I had seen one of their recent shows, Kooza, last year in Chicago under the Grand Chapiteau. There was a plot, but it was very thin. (Clown gets a box, trickster comes out and takes him to this strange world.) It was very much like a traditional circus, but without the animals. And I actually sat there at the end wanting it to not end. I think one of their newer shows, Corteo, actually has a plot. Glad to see that you seemed to really enjoyed "Alegria."

And there were contortionists for Kooza and my poor father had a difficult time watching them.

Esther, I'm a little happy and a little sad to read your review of Alegria. I chose not to see it and was feeling a little bad but the opening night reviews weren't that good so I thought...'just as well.' I LOVE Cirque but it just wasn't in the budget right now. I saw "O" in Vegas several years ago and was totally blown away. And last year while in Lisbon Paul and I stumbled upon a production of 'Quidam.' It was very cool to see it there. Paul is not a theater-goer and I had a little trouble getting him to believe this was different. Because we were on vacation he was more than willing to go and he loved it! The way I usually describe Cirque is that just when you think they can't do anything else to make the act more fantastic....they push themselves further! I'm glad you enjoyed the PVD production; wish I'd gone now.

I've never seen a Cirque show, but I've heard all sorts of magical things about them. Glad you enjoyed the spectacle.

I understand how your father felt. A little contortion does go a long way! I did really enjoy Alegria, I just wonder how much different the other shows would be?

I totally understand, the tickets are a little pricey. The Dunk was about two-thirds full at the performance I saw. Although the more expensive floor seats seem to have sold. Don't worry, I'm sure you'll get a chance to see them again!

Yes Bob, there really is a Dunkin' Donuts Center! (The Dunk for short.)

I think Cirque is an experience that's definitely worth seeing.

I'm glad you liked it. I saw Mystere and then O in Vegas. I liked Mystere enough to go back for O, but that overdid it. Perhaps its just sensory overload for me because it just makes me want to pull my hair out.

i've yet to see a cirque show. i guess i'm just meh about the whole thing.