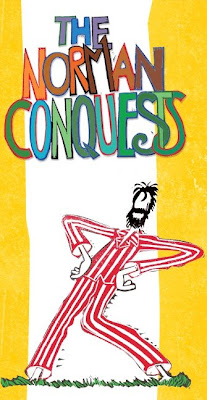 I never intended to see even one part of British playwright Alan Ayckbourn's trilogy The Norman Conquests when it transferred to Broadway from London's Old Vic Theatre.

The plot didn't particularly interest me and the thought of seeing three plays in one day was daunting. (Never mind standing in line at the ladies room for three bathroom breaks.)

But then the reviews started coming in - from my fellow bloggers and other theatergoers I respect. They were so enthusiastic, beginning with Broadway & Me, that I thought well, it'll be an experience - my first theatre marathon. I'd be at Circle in the Square from 11:30 a.m. to 10:30 p.m., with breaks for lunch and dinner.

(Plus, I got to share the experience with my blogging buddy Chris, of Everything I Know I Learned from Musicals. We had a fun lunch at Vynl. Then, dinner at Pigalle with Steve On Broadway, the love of his life and some very tasty grilled yellowfin tuna. A win, win, win.)

The plays - Table Manners, Living Together and Round and Round the Garden - were written and take place in 1973. They are set at different times on the same weekend in different parts of the same house. The same six characters are in all three and I knew within the first hour that I'd love spending time with them.

I definitely related to the frazzled Annie, played by Jessica Hynes, who cares for her needy but unseen mother and desperately needs a break. Ben Miles plays Tom, Annie's possible suitor, a taciturn veterinarian who seems ill at ease around people and animals.

Annie's brother Reg is played by Paul Ritter in a self-centered way that reminded me a bit of the character Ricky Gervais portrays in the British version of The Office. Reg and his wife Sarah, a prim and somewhat bossy Amanda Root, come for the weekend so that Annie can get away.

Also on hand is Annie and Reg's sister Ruth, played by Amelia Bullmore, whose nearsightedness causes many comic moments. She's just about at the end of her rope when it comes to her lothario of a husband Norman, an assistant librarian played brilliantly by Stephen Mangan.

While the entire cast is superb, Mangan was my favorite. Bearded, unkempt, with a wild head of hair, he is such a physical, expressive actor. And he delivers a performance that I will never forget.

From the way the other characters talk about him, I was prepared to despise Norman. But Mangan makes him sympathetic and charming, totally honest, lacking in guile and quite sensitive - even if he is an unscrupulous cad at times. I could never hate Norman - only love him.

I'm a fairly easy theatergoer to satisfy - just don't bore me. It's a tribute to the wonderful ensemble - and director Matthew Warchus - that even after seven hours, I never got tired of watching these six distinct, vivid personalities interact.

There was always something unexpected, some wound to be reopened, some revelation, some argument to break out - often with hilarious consequences, some new person for Norman to seduce. The plot that I didn't think would interest me, well, I ended up being totally absorbed. It was so much fun to sit there all day and watch this story unfold.

The plays are witty and hilarious with a lot of physical humor. I can't remember the last time I laughed so hard, so often, sometimes to the point of tears. But Ayckbourn also gives us some very serious moments when you truly get a sense of these characters' anxieties.

The Norman Conquests turned out to be one of the best and most unique theatergoing experiences I've had. I'm so glad I didn't miss it. Because it was in the round and because I spent so much time with them, I feel like I got to know these characters so well.

But I'm afraid that the popularity of the "trilogy days" may have led people to believe that if you can't see all three, it's not worth seeing any of them. And that's absolutely not true.

If you can only see one, I recommend Table Manners, which I think stands best on its own. Unfortunately, The Norman Conquests, which won the Tony award for Best Revival of a Play, closes on July 26. So you haven't got much more time.
Posted by Esther at 12:30 AM

Esther, I love your reviews. YOu always make me want to hop on a train and head to NYC - right now! I didn't realize the Norman Conquests was a trilogy. Fascinating. I can understand your hesitation to sit through 7 hours of plays. Glad it was worth it. Sounds intriguing. Sorry I missed it.

I'm glad you gave it a chance and came out on the up side; I haven't heard of anyone being disappointed with this.

And I've decided, after much reflection, that Reg of the Exceedingly Tight Pants is my favorite character. Looking forward to seeing them all one last time.

Great review! I saw them separately, and not in the regular order. I actually think that if people only see one, they should see Round And Round The Garden (which was my first!) I laughed so hard that I did cry (from all of them.) When I saw the third one, I always cried knowing that I had completed the trilogy. If I had more money and time, I would have gone again!

Thank-you so much for the kind words Pam. I always feel like hopping on a train and heading to NYC! Really, the seven hours went by very quickly.

Reg is great, and so is Sarah. I definitely related to Annie. I know it's kind of taking the easy way out to say that Norman is my fave, since so much of the action revolves around him. But thinking about Stephen Mangan's performance just puts a big smile on my face!

Thanks, Michele! I agree - I could definitely see them again. The pacing is so well done that I never felt bored. The acting is just superb and the one scene in Table Manners, when Norman comes in for dinner with his baggy suit and hair slicked down, well, that was just about the funniest thing I've ever seen on stage.