A few developments since I wrote about the Providence Performing Arts Center's 2009-2010 season: 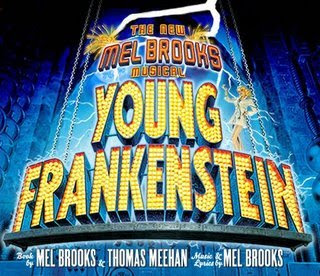 Roger Bart and Shuler Hensley will be reprising their Broadway roles for the national tour of the musical Young Frankenstein, which kicks off in Providence Sept. 29 and runs through Oct. 4.

I was kind of surprised by this announcement, since Broadway tours are normally recast. And normally, I'd be excited that a show is coming to Providence with part of its original cast. Sadly, not this time.

Bart, probably best known as the murderous pharmacist on Desperate Housewives, plays Dr. Frederick Frankenstein, who travels to Transylvania after inheriting the family castle. Hensley is the monster he brings to life.

Unfortunately, I wasn't a big fan of Young Frankenstein on Broadway or Bart's performance. I loved the 1974 Mel Brooks movie and the way it so cleverly spoofed the horror genre. But the musical was a disappointment. While it is a pretty faithful scene-by-scene, joke-by-joke retelling, I didn't find it nearly as clever or funny. Here's my review.

I'm more excited about a new addition to the schedule. Rent is returning to PPAC from Nov. 17-22. What's that you say, another Rent tour? Wasn't it just in Providence like a year ago? Yes, in January 2008, and here's my review.

But this time it features Anthony Rapp and Adam Pascal, who starred as Mark and Roger in the Broadway production. My friend and fellow blogger Chris Caggiano from Everything I Know I Learned From Musicals saw the show in Boston and you can read his review.

Finally, as previously announced, the musical Jersey Boys makes its Providence debut next spring, running from May 12 - June 6. The tour is currently in Boston and while I don't know whether it'll have the same cast in Providence, here's Chris' review.
Posted by Esther at 11:30 AM

We are getting Young Frankenstein in San Antonio this season too at the Majestic Theater.

Well I would still encourage people to see it. When I saw it, everyone around me seemed to be laughing hysterically. And there were some parts I liked. I was getting a cold that day, too, so I wasn't in the best shape! Plus, everyone's tastes are different.

You'll love Rapp and Pascal. I saw the show when it came to Denver in June and those two were phenomenal--full of youthful energy (despite being in their late 30's) and in command of every inch of the stage.

I was lucky enough to meet Rapp at a cast party after the show. The rest of the actors blew right by us media types (can't blame them), but Anthony took the time to talk with us. A nice guy, and smart too.

Kind of unfair to make a comment that was created by a genius actor, writer, producer like Mel Brooks musical. I love the film version but he retransforms this into a hilarious and lyrical preformance. I saw this musical on Broadway and WILL be seeing it again on tour. No one can replace Wilder, Kohn or any of the films cast, but the musical cast is successful in being entertaining and funny.

Thanks for the comment, anonymous. I'm glad you enjoyed Young Frankenstein on Broadway and will have a chance to see it again.

Everyone has different tastes and there are certainly shows I've loved that other people didn't. That's what makes for a great discussion.

There were parts of Young Frankenstein that I loved, including Christopher Fitzgerald as Igor, but overall I was a bit disappointed.

Still, I would definitely tell people to go see it and make up their own minds!