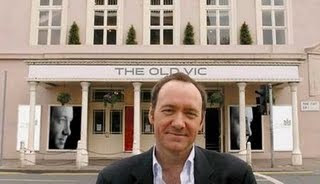 Today is a very special day at Gratuitous Violins headquarters. Fifty years ago on this day, in South Orange, N.J., a baby boy was born named Kevin Matthew Fowler.

Within a few years he moved with his family to Southern California, where he grew up and where a guidance counselor would one day suggest that he direct some of his boundless energy toward the drama club.

On a school trip to the Mark Taper Forum in Los Angeles to see Juno and the Paycock, he met his idol, Jack Lemmon, who told him that if he wanted to be an actor, he should go to New York to study.

Eventually, he made his way there, spending two years at Juilliard, appearing in Shakespeare in the Park and working at the Public Theater until Joseph Papp saw him in an off-off-Broadway play and recognized his talent. He promptly fired him and told him to go be an actor.

Shortly thereafter, in August 1982, he made his Broadway debut at the Brooks Atkinson Theatre in a revival of Ibsen's Ghosts, playing Liv Ullmann's son. And he picked up a new name - Kevin Spacey.

He would go on to win the Tony for Best Featured Actor in a Play for portraying Uncle Louie in Lost in Yonkers and two Oscars, for roles as a small-time con man in The Usual Suspects and a suburban father in the midst of a midlife crisis in American Beauty.

But the Kevin Spacey role that had the biggest impact on me was his portrayal of singer Bobby Darin in the biopic Beyond the Sea. As I've written before, I fell in love with the movie and with Kevin's singing and did something I don't normally do - I sent him a fan letter in care of The Old Vic Theatre, where he's been artistic director since 2004.

And he was gracious enough to send me a reply from London: 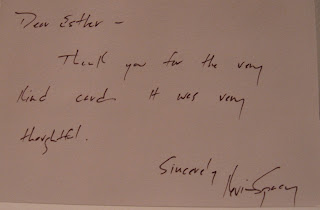 I can't tell you how thrilled I was to get that note in November 2005. It truly lifted my spirits at a difficult time.

The more I read about Kevin and his work at The Old Vic, the more of a theatre fan I became. My determination to see him on Broadway in A Moon for the Misbegotten set me on a path I could never have imagined.

Without Kevin Spacey I wouldn't have my trips to Broadway, my blog and most of all, so many new and dear friends in my life to treasure. Kevin, I hope your friends make this day as wonderful and unforgettable as my friends made my birthday in May.

Playbill has a great birthday interview with Kevin, where he talks about his films and stage career. I love this quote: "In my opinion, the best actors in films are the ones who came out of theatre. You cannot go wrong by learning your craft as a theatre artist."

Coincidentally, today also marks the final Broadway performance of The Norman Conquests, winner of the Tony for Best Revival of a Play and a transfer from The Old Vic. I was lucky enough to see the trilogy a week ago and it was an incredible experience.

Here are Kevin and cast member Jessica Hynes talking about the production:


In the Playbill for The Norman Conquests, Kevin writes about The Old Vic's education and outreach efforts designed to bring theatre to a wider audience and nurture young talent. It's an effort he's expanded to New York.

As he notes, "Theatre needs dedicated champions in order to flourish and grow." Well, Kevin Spacey has certainly been a dedicated champion. And for this talented actor, a man whose gesture of kindness meant so much to me, I hope that I can be one, too.

So happy birthday, Kevin - and come back to Broadway soon!
Posted by Esther at 1:00 AM

Cool! That's pretty exciting getting a handwritten note. Bet you're glad you wrote that letter.

Oh, I can't even begin to tell you how glad I am! I owe Kevin a lot. And I've heard from many other fans who've gotten personal replies. He's very good about that.

I just happened to find your site - very nice!! I love Kevin Spacey too and had the opportunity to see Moon 5 times in NY!

Thanks for the comment, stratcat! I only had a chance to see Moon twice but it was great. I swear at one point, Kevin and I made eye contact!