The talented and gracious Ms. Ripley 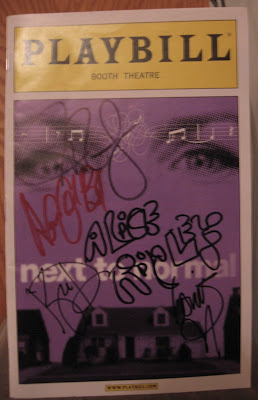 One of the thrills of going to Broadway has been the chance to meet the actors afterward and get my Playbill signed.

It's not simply the signature - it's hopefully sharing a few words with a performer whose work I've just enjoyed. You can't do that after watching a movie or a tv show.

I realize that the actors don't have to come out, so whenever they do I appreciate it. This time, like my previous trips to New York, I've had some wonderful experiences.

But seeing the herculean effort Alice Ripley made to greet fans at the stage door after Next to Normal Sunday night truly was something special.

This was her second show of the day in a very demanding role that's almost entirely sung - there's very little spoken dialog in Next to Normal. So she must have been exhausted. Still, she looked great - full of energy, talking and posing for pictures. (And as you can see, she has a pretty distinct signature. It's like a work of art!)

I'm not very good with crowd estimates but there must have been at least a hundred people waiting for her at the Booth Theatre stage door, in Shubert Alley. Her fellow cast members, J. Robert Spencer, Adam Chanler-Berat, Kyle Dean Massey and Louis Hobson, had already come out and signed.

(The only one I missed was Jennifer Damiano. This has happened to me before, where I've gotten every cast member's autograph but one. There must be a rule that one person must stay away from the stage door, just like one Cabinet member is at a secure and undisclosed location during the president's State of the Union address.)

Ms. Ripley took a long time to make her way around the circle of fans. She wasn't simply signing her name, she was stopping to talk with almost everyone. As she got closer to where I was standing, I could tell that she was having some pretty intense conversations.

My guess is that because she plays a woman struggling with mental illness, she meets a fair number of people who have a family member in a similar situation. And from what I could tell, she wasn't brushing anyone off but was taking the time to listen.

When it was my turn, I congratulated her on her well-deserved Tony award. I told her I thought Next to Normal was such a compelling look at a family in crisis.

I expected her to thank me and move on, but she kept talking, about how this was such a great role for a woman and how most musicals are centered around men and she's been waiting for this opportunity for so long. She just volunteered all of this. I didn't even have to ask a question!

The one thing that made me angry was the woman standing next to me with four Playbills. I asked her why she was getting four of them signed and she said two were for friends and two were for her.

Now, I don't have a problem with getting a Playbill signed for a friend. It's a wonderful, thoughtful thing to do and I treasure the ones friends have gotten for me. I've done it myself for other people. But four? That seemed excessive. I'm just hoping none of those end up on eBay.

As I left Shubert Alley I could see Ripley still talking to the remnants of the crowd. What a gracious, classy woman. I'm so glad that I made a point of telling her how how much I appreciated the time she spent with us.

So here's to you, Alice Ripley and to all of the other actors who've taken the time to sign Playbills, pose for pictures, share a few words with fans. For me, your graciousness is part of what makes going to the theatre so exciting and so unique.
Posted by Esther at 12:30 AM

Jennifer Damiano didn't sign when I saw the show either; she snuck out the back. Must not be something she wants to be a part of.

Alice Ripley is just beyond talented and very friendly, and I can confirm this too! I had a very similar experience, so this is definitely the standard for the N2N stage door. Beyond nice and willing to answer questions and take photos. A class act!

What a lovely story! Thanks for sharing. You should become her facebook friend (if you aren't already). She's such a unique individual.

All the fan photos and youtube videos from the N2N stagedoor -- she just so consistently genuine. How refreshing!

Thanks for the comment, Chris! I think Alice Ripley would be out there anyway - she's such a nice person and this is the role of her career. But I also wonder if she feels a special obligation because of the subject matter? I agree - a class act!

Thanks Bob! I didn't know I could friend her on Facebook. I'll have to check into that.

That is truly amazing. What a class act.

Alice is truly a wonderful person. I was there Sunday night ~ pre-birthday thing. She is so genuine ~ the whole cast is really. :)

I like Ripley's signature. You can actually tell who signed it. Most actors just do an indiscernible squiggle. It's nice when you can remember whose signature is whose.

Great story....she sounds like a nice person. With that signature she couldn't move through a crowd quickly!

Thanks for the comments, Pam, Violet, Sandy & Katie. Alice Ripley truly is a classy woman.

And I agree, most actors do develop a barely readable squiggle of a signature. Makes sense, since they have so many Playbills to sign. But it's nice when one is so distinctive and you can actually make it out!

It's funny, I didn't actually look at the Playbill until I'd walked away. And when I saw her signature I couldn't believe it. You're right - it does take a long time!