Congratulations to Playbill, which celebrates its 125th anniversary today.

Yes, of course I have all of mine, from every Broadway show I've attended. And all my tickets, too. Okay, that's only been since 2007, so it's not a remarkable number, but it's a start! 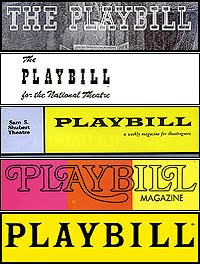 When I see one discarded on the floor of the theatre at the end of a performance, it makes me a little sad. Why wouldn't you want to take your Playbill home?

Some are covered with signatures I got at the stage door. One got a little wet from the rain but most are in pretty good shape, sitting in brown paper shopping bags from Whole Foods. (Yes, I know I need to get binders.)

And I wish shows would keep their color covers longer. I've written before that the black and white cover for the 9 to 5 Playbill looked a little washed out.

I've never attended a Broadway opening night but I do have two opening night Playbills, gifts from the sweetest SOB I know. One is from the first Broadway show I ever attended, A Moon for the Misbegotten, signed by Kevin Spacey and Eve Best, autographed to me personally!

I try not to obsess too much but I have badgered an usher once or twice when I was handed a Playbill that I considered slightly imperfect. I kept asking for new ones at Hairspray until someone finally pointed out that the smudge on the cover was Tracy Turnblad's nose.

Sorry! Maybe I'm a little obsessed.
Posted by Esther at 11:00 AM

I have been known to sneak a replacement Playbill from the stack of them near the doors on my way out of the theater if my cover is damaged.

Yeah, that's probably what I should do instead of badgering the usher. The Hairspray incident was funny, though. I did feel a little embarrassed after insisting that my Playbill had a smudge!