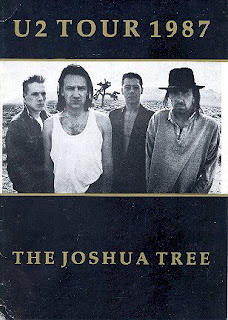 I'm watching the season premiere of Saturday Night Live, with musical guest U2! (Speaking of musicals, I'll be on the lookout for any references to Spider-Man.)

In case you're interested, I saw the band once, in Syracuse on Oct. 9, 1987. I remember Bono's arm was in a sling because he'd dislocated his shoulder. It was also the same night as a friend's goodbye party, which I rushed to after the concert.

Here's the playlist, which actually contains most of my favorite U2 songs. (Thanks to James Sims of the Sofa Snark blog for pointing me to the site where I could look it up!)

Encore(s): Bullet The Blue Sky, Running To Stand Still, With or Without You, 40

Update: U2 performed four songs on SNL: "Breathe," "Moment of Surrender," "Ultraviolet," and after the show ended, "With or Without You."

I feel like U2 is one of those bands I MUST see before I die.

Well they are a great band! I hope you get to see them someday. Don't worry, they'll be around for awhile - and so will you!