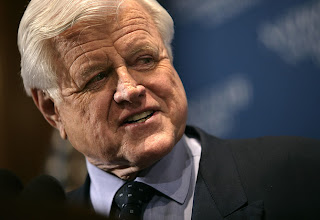 Today, Democratic Rep. Jerrold Nadler of New York is expected to introduce a bill repealing the 1996 Defense of Marriage Act. If Democrats truly want to honor the memory of Sen. Edward Kennedy, this would be a good place to start.

Reading the obituaries for Kennedy, who died last month of brain cancer at age 77, I was struck by the fact that he was one of only 14 senators to vote against DOMA.

I looked up the Senate roll call on the act, which bars the federal government from recognizing gay unions, and I could not believe some of the people who voted for it, including many Jewish members of Congress.

I don't understand how Jews, especially, could vote for a bill whose sole purpose is to target a minority group that continues to face discrimination. Only one word describes it: shanda. We're supposed to be on the side of protecting civil rights, not taking them away.

I know some of Nadler's colleagues, including Rep. Barney Frank, think introducing a bill to repeal DOMA at this time is a bad idea. And even Nadler's staff acknowledges that there's little chance of the matter coming to a vote anytime soon.

Frank's argument is that there are other, more achievable goals, like repealing "Don't Ask, Don't Tell" and passing legislation that would prohibit employment discrimination based on sexual orientation.

Of course those things are important and Democrats in Congress should get to work on them. There was an editorial Sunday in The New York Times that noted in 29 states, it's still legal to fire a worker for being gay. That's un-American and unacceptable and disgraceful. It's just as wrong as someone losing their job because of the color of their skin.

But it's also unacceptable that thousands of legally married gay and lesbian couples, many of them with children, are denied their rights under federal law.

Ted Kennedy had an unwavering commitment to equality and often called civil rights "still the unfinished business of America." In 2007, he made this statement regarding the Employment Nondiscrimination Act:

“America stands for justice for all. Congress must make clear that when we say 'all' we mean all. America will never be America until we do.”

I can't think of a better tribute to the Massachusetts senator than making sure that work gets finished.
Posted by Esther at 8:30 AM