Two from the Banned Books shelf

It's Banned Books Week, that time of year when the American Library Association draws attention to censorship and promotes the freedom to read. The first I'm against and the second I heartily endorse! (Thanks to Amanda at The Zen Leaf for alerting me.)

According to the ALA, 513 challenges were reported to the Office of Intellectual Freedom in 2008.

The 10 most "controversial" (scare quotes!) titles include two that I've read: Khaled Hosseini's much-praised The Kite Runner, about his native Afghanistan; and the children's book Uncle Bobby's Wedding, by Sarah S. Brannen, about two male guinea pigs who tie the knot.

The Kite Runner made the list because it contains offensive language, it's sexually explicit and "unsuited to age group." I don't quite understand that last part because as far as I know, the novel's "age group" is adults. This isn't something a young child would be interested in at all.

While there is a scene of sexual violence, it's not done in a titillating way and it's absolutely essential to the story. And I don't remember an excessive amount of profanity.

This is an absorbing, thoughtful novel that a teenager could definitely handle. It's a window into a country and a culture in which Americans ought to have a great deal of interest. It's also an immigrant story, as the main character and his family struggle to make new lives for themselves in the United States.

Uncle Bobby's Wedding made the list because it's "unsuited to age group and homosexuality." I first heard about it in 2008, when Colorado librarian Jamie LaRue wrote about a challenge from a patron. 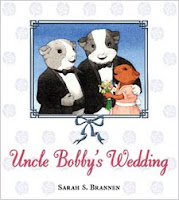 This is a sweet, beautifully illustrated story about a little girl gerbil named Chloe who's afraid of not being able to spend as much time with her favorite uncle once he gets married.

I can't imagine anyone possibly being offended unless they have a heart of stone. It's about the importance of family and the vocabulary seems totally appropriate for the intended age group. The love between Bobby and Jamie (the two male gerbils) is presented matter-of-factly. There's no big discussion about it.

What offends me are people who find books with gay and lesbian characters offensive, as if it's something we can't talk about "in front of the children." It's just as demeaning and bigoted as banning books with black, Latino or Jewish characters.

Besides, "the children" may already have a classmate with a gay or lesbian parent or family member. Those kids have the right to find books about their families on the shelves, too.

My friend Jamie is personally responsible for getting Roald Dahl's "The Witches" banned from the Alpena Public Schools when she was in elementary school. She did a report on it, and the teacher was appalled that such a book existed. The rest...history.

I'm the Jamie in question. True story. I did a report on it, and the movie had just come out with Anjelica Huston, and my teacher decided to screen the movie for all of us, and one kid got super scared and the mom freaked out and as such.. the book is banned. :(

Thanks for raising awareness of book bannings and challenges. I'm a librarian and whenever this week comes around and I re-read the lists of banned and challenged books, I'm appalled by the ignorance people have. It is shocking how afraid people can be of differences and it is important to remember that censors are trying to ban or hide important information. This week is a good reminder that we are lucky to live somewhere with free access to information, a freedom that not all enjoy. Celebrate that freedom and read a banned or challenged book. Also, support your local library because they are fighting for your right to have yourself and your neighbors represented in books in library collections. Information on Banned Books Week from the American Library Association is here. Thanks again Esther!

One thing I am grateful for, and have always appreciated about my parents and teachers, has been the freedom to read whatever I wanted. My 7th grade teacher in Catholic school encouraged me when I started reading Stephen King, and even engaged me on some conversation involving them.

In my junior year of high school we read "The Adventures of Huckleberry Finn" and had an involved discussion about the book's content, the "n" word in our society and explored why it was banned. My senior year AP class read "Giovanni's Room" which was removed from the list some years later b/c of parental complaints.

As someone who has never been discouraged from reading anything at any point in my life, I find the idea of banning books unfathomable.

I've never heard of Uncle Bobby's Wedding! I'm so going out to find that now, thanks!

Wow, Bob and Jamie, that's impressive. I've never known anyone responsible for getting a book banned. Such power and at such a young age! I will definitely have to check out The Witches. It seems to me like they could have just banned the movie, not the book. (And Jamie's blog post describing the whole unfortunate episode is terrific!)

Hey Emily, it's my pleasure. I worked in a library part-time all through high school so I'm a big supporter of librarians and all the great work they do. It is appalling to see some of titles that get challenged. I do wonder whether the people who try to get books banned spend the same amount of effort monitoring their kids' tv watching!

Hey Kevin, thanks for the comment! I was generally allowed to read whatever I wanted, also. Although I do remember a couple of books that my mother thought were too old for me, including Arthur Hailey's Airport. (Must have had some steamy sex scenes or naughty words!) I'm pretty sure we read Huckleberry Finn in high school, too. It's all in the way the material is presented, and it sounds like your class did a good job with it.

Oh Amanda, Uncle Bobby's Wedding is adorable! I read it at Borders after reading the blog post from the Colorado librarian.