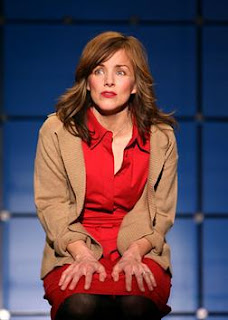 I'm so glad Downstage Center is back but while the American Theatre Wing podcast was on hiatus, I had a chance to catch up on some of the older interviews.

For example, I hadn't listened to the interview with Alice Ripley, which aired in February 2008. This was before Next to Normal opened on Broadway, when it was at New York's Second Stage Theatre. And she's just as forthcoming as she was when I met her at the stage door.

At one point Ripley is asked about her eating habits. She explains that she's very careful what she puts into her body because it can affect her singing voice. Apparently honey helps her respiratory system.

And then there was this, which truly made me gasp:

"It's always a challenge to figure out what to eat in between shows on a two-show day. Sushi's usually a good thing. But you know you have make sure you eat just the right thing because you don't want to be weighed down by it."

Sushi?! Yikes. Alice, please be careful with that, okay?
Posted by Esther at 10:00 AM