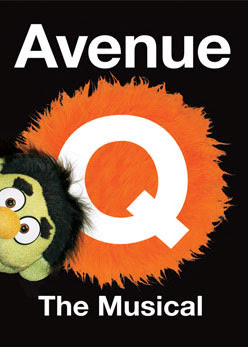 I bought my ticket yesterday for the tour of Avenue Q, so next month I'll finally get to see whether this cheeky little musical - with full puppet nudity - was worth all the hype. (Did I mention it won the Tony?)

Now I don't mind a little puppet nudity, as long as it's tastefully done and an integral part of the story. But what concerns me a bit is that Avenue Q will be swallowed up in the 3,100-seat Providence Performing Arts Center.

This is a show that played on Broadway for six years at the 805-seat John Golden Theatre, one of the Main Stem's smallest. It closed Sept. 13 after 2,534 performances and will reopen off-Broadway Oct. 9 at the New World Stages complex, in a 499-seat venue.

I don't think the Avenue Q tour is unique. My guess is a lot of touring productions play in theatres much bigger than your average Broadway house, most of which seem to be around 1,500 seats, with quite a few under 1,000. The largest is the 1,933-seat Gershwin, appropriately home to Wicked, one of Broadway's biggest hits.

But in small-sized cities like Providence, there aren't a lot of options for touring Broadway shows to set up shop. They might have one theatre that can handle them. Even if there is a second choice, naturally the producers want to be in the biggest possible space.

For some shows, I don't think it matters as much. I saw Spring Awakening on Broadway at the 1,108-seat O'Neill and in Providence, both times in the orchestra section, and I loved the musical in both places. I saw Wicked sitting in the PPAC mezzanine, and I was captivated. 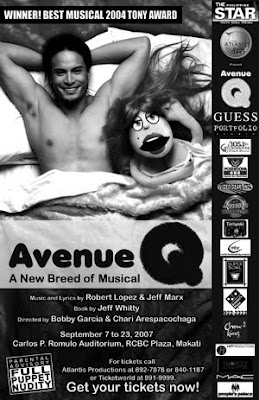 So I'm looking forward to Avenue Q, the show that snatched the 2004 Tony for Best Musical out from under my beloved Wicked. For comparison purposes, it's fitting that I'll be in the same theatre. In fact, Avenue Q even has an advantage - this time, my seat is in the orchestra.

All I can say is: Puppets, I hope you're up to the challenge. (And I couldn't resist including a poster from the Philippines production. This is not a show for little kids!)
Posted by Esther at 11:25 AM

3100? Whoa. I thought our Canon Theatre (named after the camera company but almost fitting for its size) is only abotu 2000 and I thought that was huge.

It's one of those old, ornate former movie palaces and I guess they built them big!