Into the woods - my Yosemite adventure 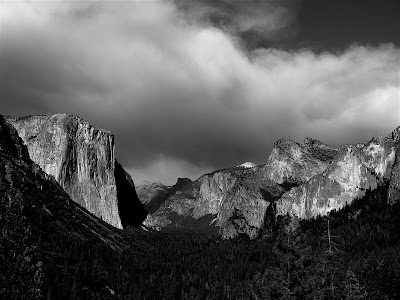 A new, six-party documentary by Ken Burns, The National Parks: America's Best Idea, will air on PBS beginning Sept. 27. At the series' Web site, you can submit stories and photographs about your national parks experience. 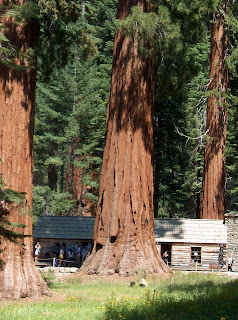 In 2004, I visited Yosemite National Park with friends who live near San Francisco. Our first day we drove south, to Wawona, to see the giant sequoias and they were mighty impressive.

The next day, I wanted to spend some time in Yosemite Valley, so we split up. I took a bus from our motel to the visitor center and wandered around, went to the Ansel Adams gallery, saw a movie about the park.

Then, feeling energetic, I went to the information desk to get a list of Yosemite Valley day hikes. The park ranger gave me a sheet of paper with eight or nine hikes, a description and their level of difficulty from easy to very strenuous.

She checked off an "easy" one, Mirror Lake/Meadow, which you can do as either a 2-mile or 5-mile loop. I rode the shuttle bus to the starting point and I was ready to go. This particular hike starts with a paved trail, which was no sweat. Then, feeling ambitious, I went off the trail.

Athough I was a Girl Scout, I must have missed the meeting where they taught us how to find our way around in the woods. Give me a city neighborhood and I'm fine. But what markers do you use in the woods? All the trees and rocks look alike! And there are no helpful signs to point you in the right direction.

While Yosemite does get crowded in the summer, it's easy to find solitude once you leave the paved paths. Every once in awhile other hikers or runners would come through but I was pretty much alone. The woods were beautiful and I kept climbing until I had a spectacular view of the meadow below. 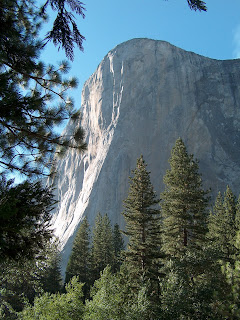 Once I decided to head back down, though, I was in trouble. I could see the gigantic granite monolith of El Capitan in the distance, so I had a vague idea of which way to head, but I couldn't find anything resembling a paved path.

Of course I didn't bring nearly enough water and I was down to my last granola bar. Yosemite isn't like Disney World, where they check at the end of the day to make sure everyone's made their way out safely. I never tried my cell phone but I'm not sure it would have worked.

Up until that point, my new Merrell hiking shoes had kept me steady on my feet. Then, I fell and skinned my knee. Ouch, did it hurt! Luckily, a couple with a baby were behind me and helped me up. I told them to go on ahead, I'd be fine.

From then on, I walked very gingerly, carefully stepping over every rock. I could not believe there were so many of them. Clearly, this was not a path intended for human use. Mountain goats, maybe.

Eventually, I reached the main road and the shuttle bus back to the visitors center. You would not believe the rush of adrenaline I felt at that point. I felt like John Muir!

I could have gone to the first aid station to get a bandage but I didn't want to miss the next bus to the motel and I wanted to hit the gift shop. I weighed the options - Band-aid, souvenirs - and decided the knee could wait.

Now, I have a lovely, framed Yosemite poster on my wall and an adventure I'll never forget.
Posted by Esther at 12:30 PM

Great post! Yosemite is one of the places, like Grand Canyon, that you have to see for yourself to understand its beauty. We were there for a very short visit back in '88. I've always planned to go back but not yet.

Thanks! I've never been to the Grand Canyon but I'd love to see it someday. And you're right, there's no substitute for seeing it in person.