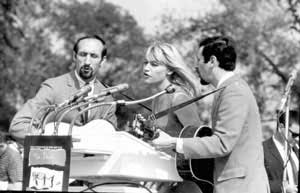 Mary Travers passed away Wednesday in Connecticut at age 72, after a lengthy struggle with leukemia.

For some reason, this one hit me harder than some of the other recent celebrity deaths. Maybe it's because I've been listening to Peter, Paul and Mary forever.

I saw them in concert once, in Boston in the 1980s, and they played many of the songs I loved. I mean, who doesn't love "Blowin in the Wind," "If I Had a Hammer," "Puff the Magic Dragon," "I'm Leaving on a Jet Plane." I'm so glad I had a chance to hear them perform live.

I didn't realize this, but Travers appeared on Broadway three times - two of them were concerts with Peter, Paul and Mary in the 1980s, to benefit the New York Coalition for the Homeless. But in 1958, she was part of a short-lived musical comedy revue called The Next President, with Mort Sahl, that played at the Bijou Theatre, where the Marriott Marquis now stands.

As part of the folk trio with Peter Yarrow and Paul Stookey, Travers sang the songs that became anthems for the civil rights and antiwar movements. Peter, Paul and Mary performed "If I Had a Hammer" at the 1963 March on Washington, where the picture was taken.

The New York Times obituary notes that the group's politics were somewhat risky for attracting a mass audience.

“There was a real possibility that we would lose the entire Southern market over the issue,” Ms. Travers told Robbie Woliver, the author of Hoot!: A Twenty-Five Year History of the Greenwich Village Music Scene, an oral history. “But we felt that the issue was more important than the Southern market.”

Amen to that. Rest in peace, Mary Travers.

This is part of the soundtrack of my life. RIP Mary Travers

Hey Sandy. I know, I felt exactly the same way.

I interviewed Mary Travers while I was in college in the mid-'80s -- in a phone interview. I think I was given like 15 minutes, among a long line of interviewees, I'm sure. I don't remember the interview today and unfortunately don't have a copy of the wonderful story that I'm sure I produced (ha!), but I did manage to piss her off by referring to Bob Dylan as a folk singer. It was very funny at the time, at least for me. Yes, RIP Mary Travers. Puff the Magic Dragon, in deed.

Thanks for the comment, Man of Plastic! What an insightful personal remembrance. You are so lucky to have interviewed Ms. Travers. And I'm sure she forgave your youthful misstep.